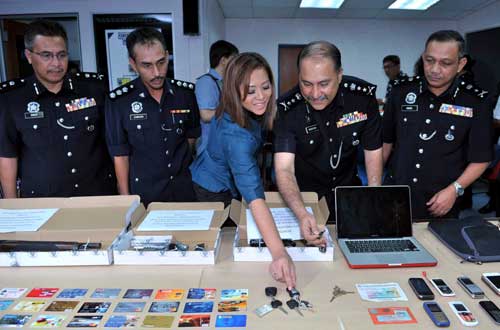 THAT’S MINE: Rita identifying some of the seized items with Mohd Mokhtar (second right). — Bernama photo

He told reporters the suspects, believed to be part of an armed gang robbery syndicate, may also have been involved in robbing and extorting former Singapore television journalist Rita Zahara Mohd Nazeer on July 1.

The men aged between 33 and 45 were picked up from three houses in Felda Ulu Tebrau about 5 am on July 4, he said.

Mokhtar said the suspects had previous criminal records for drugs, robbery, car thefts and burglaries and tested positive for drugs at the time of arrest.

“We are tracing another two men still at large,” he added, saying photo fits of the duo would be released soon.

A Nissan Sunny car, laptop, mobile phone and ATM cards belonging to Rita and her family were recovered too, he added.

“The suspects are in remand for seven days until July 10 for armed gang robbery under the Penal Code,” said Mokhtar.

It was reported that Rita had stopped her car along Jalan Susur Larkin around 12.45am on July 1 to buy some fruit, leaving her
19-year-old sister, two children, 11 and six, and maid in the vehicle.

When Rita returned, her car and its occupants were missing.

On calling her sister’s mobile phone, a suspect answered and allegedly demanded a ransom.

Her family and maid were however released on the same day at a residential area in Ulu Tiram but the suspects made off with the car and valuables estimated at RM200,000.

Commenting on a syndicate purportedly targeting Singaporean visitors, Mokhtar said there were no links established to this case and added that such allegations were unfounded.

He remarked that criminals did not target any particular group based on their origins but struck whenever the opportunity arose.

“The police will continue to ensure Johor is a safe place to live or visit,” he concluded.

Also present during the press conference at the Johor police headquarters yesterday were Rita, her family and Singaporean journalists. — Bernama