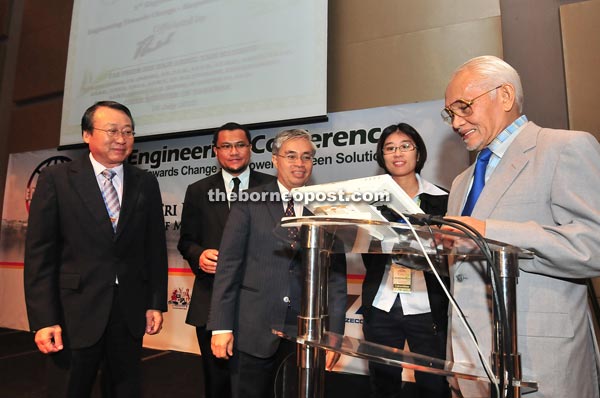 KUCHING: Chief Minister Pehin Sri Abdul Taib Mahmud has called on local and foreign engineers to share their expertise to find ways on how to develop the state’s rich water resources not only for hydro power but for conservation and other developmental uses.

He said the state with its vast river network had an abundance of resources to generate energy for industrial use, especially in Sarawak Corridor of Renewable Energy (SCORE).

“The abundant resources must be utilised in stages according to the state’s ability to invest in better control of water. This is also to avoid problems especially in line with climate changes.

“It is understood that we will face more periods of drought in South East Asia. This calls for a long-term plan to make sure that we can spread out the supply of water to be able to fend for ourselves in times of droughts,” said Taib, who is also pro-chancellor of Universiti Malaysia Sarawak (Unimas) here.

He made the call when officiating at the Fifth Engineering Conference (Encon 2012) themed ‘Engineering Towards Change – Empowering Green Solutions’ here yesterday, which was organised by Unimas and Institution of Engineers Malaysia (IEM) Sarawak branch.

Taib also advised future conferences to look at problems not prevalent in the rest of the country such as peat soil engineering, citing the more than two million hectares of soft soil and peat soil in the state as one of the obstacles for infrastructure development.

Touching on Encon 2012, he believed it would allow sharing and dissemination of the latest findings on how to put to the frontier mankind’s effort to ensure the development of the future through green technology.

Khairuddin in his speech earlier, stated that some of the key focus areas to be presented and discussed included sustainable building and structure systems, green transport systems, geo-technical and geo-environmental engineering, sustainable water, energy efficiency and advanced manufacturing technology for the future.

Among the keynote speakers were Hamzah, Prof Simon Beecham from University of South Australia and Prof Tan Kiang Hwee of National University of Singapore. Speakers from B.S Abdur Rahman University of India, Unimas, UiTM were among the 90 participants of the conference.