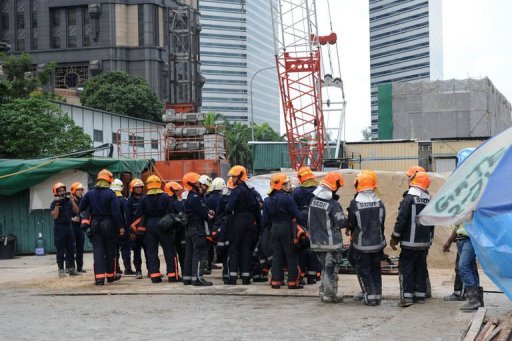 SINGAPORE: At least two workers were missing and eight others injured in Singapore when the scaffolding at a subway construction sitecollapsed Wednesday, civil defence officials said.

It was the latest incident to hit Singapore’s metro train system, which has been under pressure to improve its services and system after two major breakdowns in December last year.

Civil defence crews, trucks, ambulances and sniffer dogs were on site to carry out search and rescue operations, an AFP reporter at the scene said.

A civil defence spokesman at the site said two workers were missing while eight others who suffered minor injuries were treated at a nearby hospital.

It also concluded that SMRT’s metro system had been plagued by outdated equipment and poor maintenance for years, and that the company did not have enough engineers capable of overseeing maintenance.

The Land Transport Authority this month also imposed the maximum fine of Sg$2 million ($1.59 million) on SMRT for the breakdowns, which stranded thousands of workers.

The site of Wednesday’s accident is a new station for the latest metro line, portions of which are still under construction in a bid to meet the transport needs of a growing population.

Singapore now has a population of over five million people, including citizens, permanent residents and foreign workers. –AFP