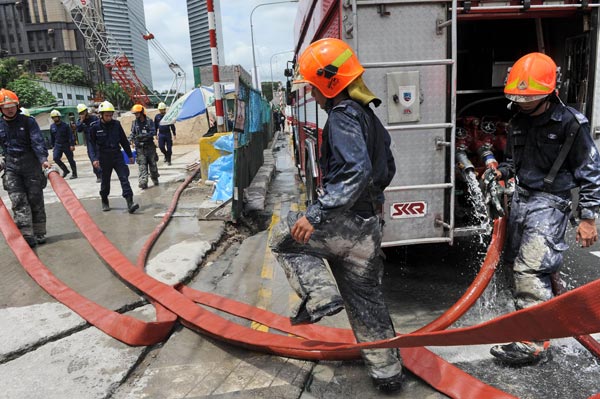 SINGAPORE: Two workers were killed and eight others injured in Singapore when the scaffolding at a subway construction site collapsed yesterday, civil defence officials said.

It was the latest incident to hit Singapore’s metro train network after two major breakdowns in December last year prompted a top-level investigation.

It was also the worst construction accident in Singapore since 2004 when a tunnel which was part of a subway line being built at that time caved in, killing four people.

A civil defence spokesman told reporters that search crews had found the bodies of the two workers earlier declared as missing.

The bodies were found one metre apart and both were submerged in wet cement and pinned down by planks of wood and scaffolding, he added.

The first body had been extricated and crews were still trying to pull out the second fatality. Water was being pumped to the affected area to keep the cement wet.

Eight other workers who suffered minor injuries were treated at a nearby hospital.

The spokesman clarified that only the scaffolding collapsed, and the tunnel “is still intact.”

It also concluded that SMRT’s metro system had been plagued by outdated equipment and poor maintenance for years, and the company did not have enough engineers capable of overseeing maintenance. — AFP