Tuesday, May 18
You are at:Home»News»Nation»A tough road in becoming a policeman 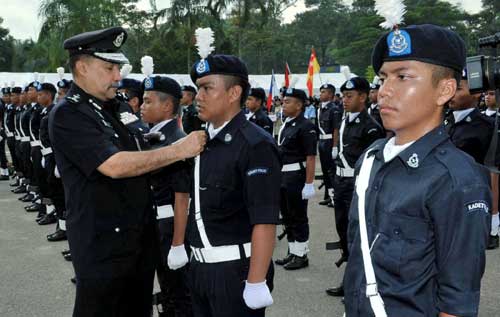 KUALA LUMPUR: At a glance, one will admire a policeman appearing smart in his uniform and projecting his authority in maintaining law and order.

Yet has anyone thought of the rigorous intake process and training one has to go through before they don the blue uniform?

For a start, those who want to join the police force have to fulfill academic requirements – at least SPM for constables, STPM/Diploma for inspectors and a degree for assistant police commissioners (ASPs).

Moreover, one must have the appropriate height to weight ratio that contributes to a smart and sturdy appearance.

Apart from that, the chest’s width should be at least 81 cm and 86 cm when inhaling. Candidates should have good vision, must not be colour blind, and be free from hearing defects.

In a nutshell, he or she applying to join the police force has to be certified fit in numerous aspects by a government medical officer.

However, their attitudes and behaviours, along with their suitability for the job, also count.

Those selected have to undergo a grueling six-month training for a constable’s post, and nine months for the inspector’s post, at the Police Training Centres (Pulapol) in the country to learn how to become policemen.

“During the first two or three months, they will be exposed to basic police training, including physical exercise.

“This rigorous training instills discipline and prepares them for the job,” he told Bernama.

The second phase teaches them knowledge in all areas of policing.

“Our training methodology focuses on the concept of ‘Security and Safety’,” he says, adding that students are even taught how to provide medical assistance while awaiting for an ambulance.

The third phase is where trainees are monitored on their grasp of what they have learnt during the first and second phase.

Zulkifli notes that the first phase is the toughest part, as it tests their mental and physical strength and their readiness to follow orders.

“We wake them up from sleep to carry out any assignments,
and this exercise is done based
on the needs of the police,” he adds.

In the future, he notes, a newly established training simulation centre will help improve their training in carrying out effective police work.

Exposing them to real police work

In the last phase of training, they will be exposed to real police work.

“They may be stationed at a district…for example as a constable they may be assigned to help set up road blocks. Or another policeman may disguise himself as a criminal or a hostile member of the public or someone attempting to offer them a bribe.

“From here we can evaluate their integrity and ability in managing the public while remaining patient.

He noted that for the trainee inspectors, they will take part in the ‘investigating game’, with trainees being given orders to open investigation papers on criminal activities, such as prostitution, as individuals tempt the candidates with bribes.

“We will follow up with other methods to evaluate the trainee’s integrity and how this noble value can be inculcated from the bottom,” he says.

Zulkifli, who has been the training commandant for the last two years, wants to see every trainee leaving Pulapol go on to serve with the highest integrity.

“Serving with integrity means they not only have to exude a respectable image from the outside, but also have to be noble in their deeds.

“They should be seen as people with integrity right from the day they start to work, as they are at the frontline in maintaining security and public order,” he says.

Nevertheless, instilling integrity in the police force starts right from their training as trainees.

The trainers have to mould trainees from numerous backgrounds – religion, race and education – into policemen who are responsible to society and the state.

“We may succeed in changing their attitude during training, as they are closely monitored, but when the training is over they may go back to their old ways,” he says, adding that the problem can be overcome if senior officers continue monitoring them.

A police constable who said he had always dreamt of being a policeman and is now attached to Sabah Police Contingent Headquarters, Muhd Azuan Azzeham, notes that the training stint at Pulapol is highly challenging.

“During the first five months we underwent physical, parade and firearms training…for the physical training we had to keep up with the allocated time,” says the eldest of two siblings.

Azuan, whose father is a retired police sergeant, notes that rigorous training is vital in instilling high discipline among the members of the force. — Bernama

Previous ArticleDo we love crocodiles more than man?
Next Article Over 200 visitors at OUM’s open day