Tuesday, December 6
You are at:Home»Columns»Nature Matters»When will they ever learn … 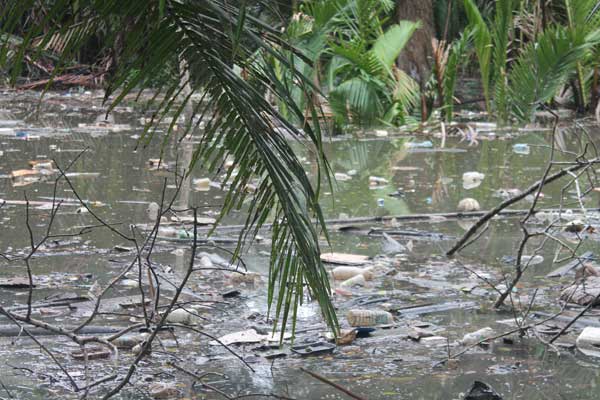 VERY POLLUTED: A river of plastic. — Photo by Mary Margaret

Beyond wars we often forget, that as humans, we are waging wars on waste, often inadvertently, against animals (fish, birds …), vegetation, and ultimately against other humans and their livelihoods.

We often read about the depletion of the ozone layer, skyrocketing carbon dioxide emissions, habitat loss and the list goes on. In the 1970s, as a teacher, I devised a course for 16- to 18-year-old students on environment, ecology and conservation; I continue to put the principles I taught into practise.

Each morning, in a beautiful countryside area in the UK, I visit my village shop. Whilst walking the 100 metres, I collect cast off sweet papers, shopping bills and plastic bottles thrown out from cars into my hedge when parents deposit their children at the school adjacent to my house. What messages to our youth are these parents giving?

I want to stress that this is a worldwide problem for in Kuching I am frequently seen walking up side roads picking up plastic bags, empty cigarette cartons and plastic bottles from roads and grass verges.

The grass cutters do their jobs in cutting grass but seldom think of picking up the rubbish before it is shredded. I witnessed in a suburb of Nairobi, Kenya another European picking up rubbish as I do in the UK and Kuching. Picking up inconsiderate people’s waste is no joke.

When I look behind restaurants and coffee shops in the centre of Kuching, I see piles of waste accumulating, albeit packed by the owners very neatly into black bin bags which, overnight, are ripped apart by feral cats and dogs and even rats. This can spread bacteria and infections to those who have to clean the muck up.

I have seen the same in London – urban foxes feast at night. The amount of plastic filth floating down the Tabuan Desa-Tabuan Jaya rivers disturbs me.

As highlighted in the June 13, 2012, issue of The Borneo Post, tonnes of rubbish are removed daily from Kota Kinabalu’s rivers. Perhaps, yes at a cost, this could be replicated in Kuching.

Whirlpools and mountains of rubbish

Where does plastic rubbish, which sweeps down our rivers end up … in gigantic swirling whirlpools in the oceans guided there by the currents. The largest is a garbage dump north of Hawaii, larger than the American state of Texas in the Pacific Ocean.

On the roof of the world, in the Himalayan Range, small but significant mountains are accumulating composed of discarded oxygen cylinders, tins, bottles, including human faeces around and beyond the base camps of Mount Everest.

As was reported recently in The Borneo Post, a huge chunk from a concrete dry dock that was swept away by the devastating Japanese tsunami has washed up on the shores of Oregon in the US. Sadly it was covered with a type of seaweed that is infectious to marine life. California expects further junk from that tsunami to hit its beaches this year.

Beyond our earth’s atmosphere (we hope), there are thousands of tons of used scrap metal floating around in outer space. This is a scrap metal merchant’s dream! If only I had the expertise and finances to collect and bring all this valuable metal back to earth for recycling.

I thought of oil spills whist writing this article and then read about the accident that hit five oil workers on one of the rigs off Miri. There have been no reports of oil spills into the sea.

I worry much about offshore oil exploration and supertanker movements. In 1967, the supertanker Torrey Canyon came to grief on the infamous rocks off Land’s End in South West Cornwall, only 10km from my home. It spilled its contents into the sea. I watched crude oil spill, slithering like a snake, along the tidal currents of the Atlantic Ocean. The effect was devastating to marine life and seabirds as thick tar in huge globules washed ashore on formerly pristine sandy beaches.

The local tourist industry was severely hit that year as swimmers sank up to their ankles in tar. It took that beach and its marine life, at Sennen Cove, around a quarter of a century to recover from that disaster.

Why so long? Up until then there was no planning at all in the UK for such an emergency. Belatedly the oil companies set up an oil pollution emergency procedure. I trust Malaysia and Brunei are well-prepared.

Human waste … Ugh. As a young Cornish boy, I would swim every summer and dive under the local raw sewage discharge polluting a lovely beach. Perhaps my immune system was inadvertently built up.

Now, in Europe, we see flashy blue flags on beaches classified as pollution free. There are several studies taking place in Sarawak looking at beach pollution levels. I wonder if we shortly will see golden flags flying on all beaches in Sabah and Sarawak to denote the seawater quality.

The price of urban development

Atmospheric pollution is hideous. Whilst I respect that urban developers either for buildings or road construction ideally enjoy dry weather conditions, the cost to human lungs or that of wildlife and vegetation should be considered.

Why? The price to pay if you live near such developments … hard luck. I have seen some 50 lorries each day full of earth, gravel or sand dumping their loads, in a construction site near to my Kuching home, creating desert-like sand/dust storms … Nearby residents inhale the dust and it coats local vegetation.

A simple solution to stop these dust storms would be to create feeder roads to the development before construction begins or in dry weather slightly water down the site.

We shall overcome one day with our ever increasing knowledge of our environment, ecology and the conservation of our planet. Everyone in our world has a part to play from senior national politicians to the person in the street.