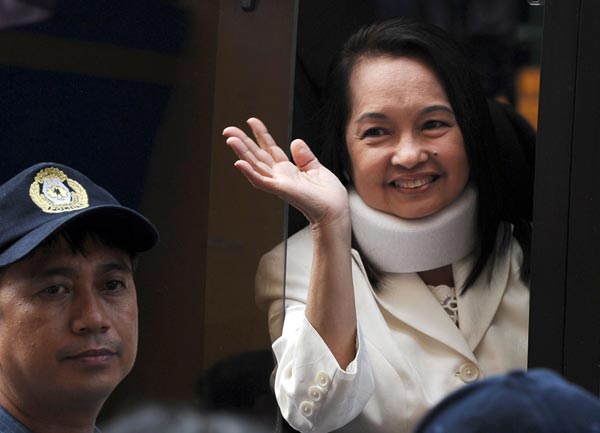 OUT ON BAIL: This file photo taken on Feb 23 shows former Philippine president Gloria Arroyo (right) waving to photographers from a vehicle after appearing in court for her arraignment in suburban Manila. — AFP photo

MANILA: Ex-Philippine president Gloria Arroyo walked free from eight months in detention yesterday after a court issued a surprise ruling granting her bail, saying a vote rigging case against her was weak.

Wearing a neck brace to support her spine that is weakened from a rare disease, Arroyo left a tightly guarded military hospital in Manila where she had been awaiting trial on the charge that could see her jailed for life.

The granting of bail appeared a major setback for her successor, Benigno Aquino, who has
said that bringing Arroyo to justice for crimes she allegedly committed while in power is crucial to his high-profile anti-graft campaign.

Aquino won the 2010 presidential elections in a landslide after campaigning to wipe out corruption that he said crippled Philippine society during the nearly 10 years Arroyo was in power.

Arroyo’s spokesman, Ferdinand Topacio, described the ruling yesterday morning from a Manila court as “a triumph of justice and a resounding denial of dictatorship” that proved her earlier assertions of innocence.

“It is a reaffirmation of what our camp has been saying all along,” Topacio said, before borrowing from a quote by former US president Abraham Lincoln.

“That the charges against the former president are as thin as the soup made from boiling the shadow of a chicken that has been starved to death.”

Arroyo, 65, was arrested at an exclusive hospital in November last year shortly after immigration authorities blocked her at Manila airport from leaving the country.

Aquino had said Arroyo was trying to flee the country to escape imminent charges against her, although she said she needed specialist treatment overseas for her spinal disease.

Arroyo was charged shortly after with “electoral sabotage” for allegedly conspiring with a feared political warlord to rig the 2007 senatorial elections.

She was then transferred to the military hospital, where she had been detained while awaiting trial. No date has yet been set for the start of the trial, which could take years to complete.

The Pasay City regional trial court, which is hearing the case, said yesterday that the case against Arroyo was weak, and that she should be released on bail of one million pesos ( 23,800).

In its ruling, the court said the prosecution failed to establish the “required quantum of proof” that Arroyo was involved in a conspiracy to rig the elections. — AFP