Wednesday, April 14
You are at:Home»World»Syria army moves forces to Aleppo as battle intensifies 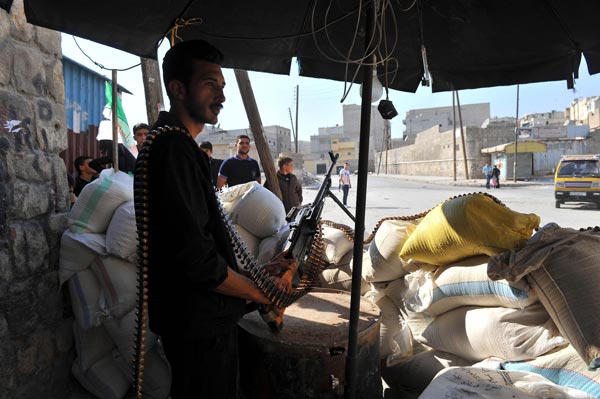 ON THE LOOKOUT: Syrian rebels man a checkpoint in the northern city of Aleppo. — AFP photo

DAMASCUS: The Syrian army moved reinforcements to Aleppo yesterday as the battle for the commercial capital intensified, with Washington saying rebel gains may result in a safe haven inside the country.

The Britain-based watchdog reported clashes in the district of Bustan al-Qasr in the south of the city. Fighting was also reported in the central Al-Jamaliya neighbourhood, close to the local headquarters of the ruling Baath party.

A “large number” of troops have been moved from the northwestern province of Idlib to join the fighting in Aleppo, a rebel spokesman told AFP via Skype.

Free Syrian Army Colonel Abdel Jabbar al-Oqaidi said he believed the reinforcements were being sent because of the intensity of clashes in Aleppo, where several districts were “liberated” on Monday.

“There are clashes right now in Aleppo, so fierce that many of their troops are running away, while dozens of others are defecting on the spot,” Oqaidi said. “Their morale is very low.”

Home to 2.5 million people, Aleppo is Syria’s second-largest city. It had been largely spared major bloodshed since the uprising against President Bashar al-Assad’s rule erupted in March 2011 but, for the past six days, heavy fighting has raged between troops and rebels.

In the central city of Homs – Syria’s third largest – a rebel was killed by a sniper in the Al-Qarabis district, the Observatory said.

Further north, in Hama province, 16 people were killed in an army assault on the village of Sharia, while two children were killed in dawn shelling of the town of Karnaz.

In Idlib province, shelling killed four civilians in the town of Kfar Roma, the Observatory added.

The group put the updated toll from nationwide violence on Tuesday at 158 dead – 114 civilians, 31 soldiers and 13 rebels.

The watchdog also reported another eight bodies found in the Barzeh district of Damascus, scene of fierce clashes in recent days. It was unclear when the victims, some of whom had their hands tied behind their backs, were killed. — AFP