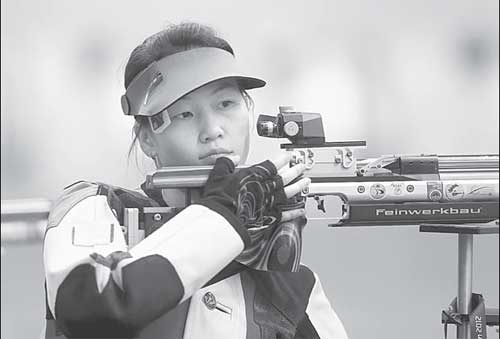 LONDON: Swimming legend Michael Phelps suffered a nervy start in his bid to become the greatest Olympian in history yesterday while Chinese shooter Yi Siling claimed the fi rst gold of the Games.

But the defending champion just scraped into Saturday’s 400m individual medley final by the skin of his teeth.

Phelps finished in 4min 13.33sec to grab the eighth and last spot in the final which takes place later Saturday.

American rival Ryan Lochte, who has established himself as a threat to Phelps in both the 200m and 400m medleys, was content to finish second in his heat behind South African Chad le Clos.

In a major shock at the Aquatics Centre, reigning Olympic champion Park Tae-Hwan of South Korea was disqualified in the 400m freestyle for a false start.

Park touched first in his heat, but left the pool stunned as the disqualification flashed on the scoreboard.

China’s Sun Yang led the way into the final. 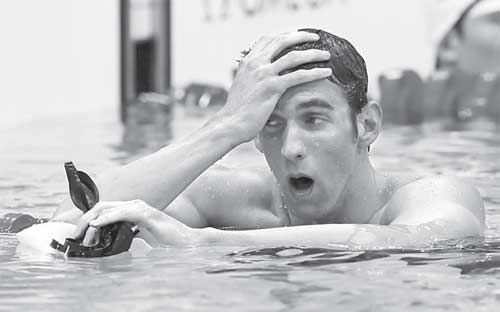 NERVY START: Michael Phelps of the US reacts after taking first place in heat 4 of the men’s 400m individual medley at the Aquatics Centre. — Reuters photo

Chinese world number one shooter Yi Siling had the honour of claiming the first of the Games’ 302 golds at the Royal Artillery Barracks in the women’s 10m Air Rifle.

Defending champion Pang Wei could make it a China double in the men’s event later Saturday.

Cavendish, the world champion, was supported by David Millar, Wiggins, Chris Froome and Ian Stannard, the national champion in a race set to finish in front of Buckingham Palace.

Meanwhile Roger Federer returns to Wimbledon, where he captured a record-equalling seventh title earlier this month.

The world number one begins his campaign to add singles gold to the doubles title he captured in Beijing in 2008 with a first round tie against Colombia’s Alejandro Falla.

Elsewhere, legally blind archer Im Dong-Hyun, who set the fi rst world record of the Olympics on Friday, and then added another as South Korea broke the team record, targets gold.

There are also golds on offer in the women’s weightlifting and men and women’s judo.

Queen Elizabeth II declared the Games on Friday night before seven young athletes lit the cauldron at the Olympic Stadium at the end of an eccentric, humour-filled showcase devised by “Slumdog Millionaire” director Danny Boyle.

Britain’s newspapers lavished praise on the spectacular four-hour long ceremony, watched by an estimated one billion TV viewers around the world.

The Times ran the headline “A Flying Start” on a souvenir wraparound photograph of the Red Arrows display team flying over the stadium while Rupert Murdoch’s market-leading tabloid The Sun went simply with “Golden Wonder”.

A budget of 9.3 billion pounds (US$14.5 billion) has been spent on bringing the Games back to London for a record third time.— AFP