Saturday, May 15
You are at:Home»News»Sarawak»Miri businessman shot dead 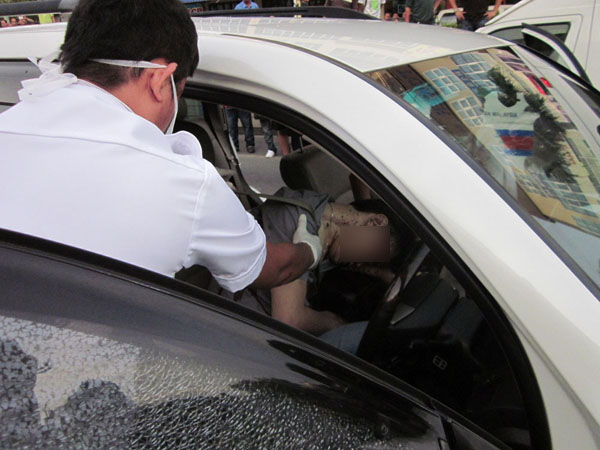 Paramedic from Miri Hospital checking on the victim.

MIRI: A fatal mafia-style shooting has erupted again, this time in Miri.

A 48-year-old businessman with interests in pubs and other ventures was shot at point-blank range at a traffic light junction in Jalan Bendahara at about 6pm.

It is uncertain whether he was hit when he stopped at the traffic light or otherwise, but eye witnesses said his white-coloured Toyota Prado moved for about 70 metres and came to a halt opposite two banks with the victim slumped towards the passenger seat in a pool of blood.

Wounds, believed to be inflicted by the gunshots, were visible on his right temple and neck.

It is understood that he died at the scene.

Two small holes, believed to be bullet holes, could be seen on the window on the driver’s side. 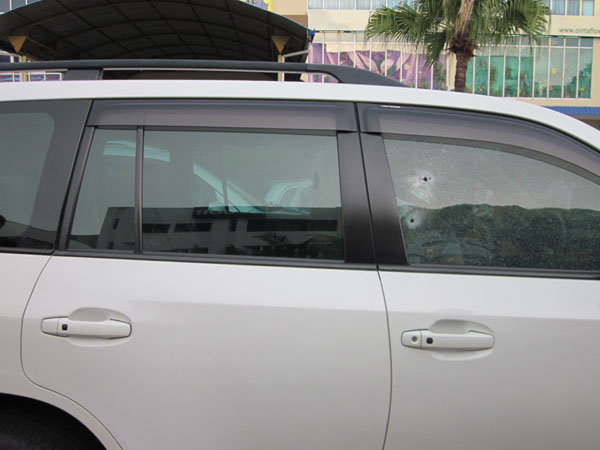 The two holes on the car’s window on the driver’s seat.

Decked in blue jeans and a shot sleeved T-shirt, the victim was driving alone when the assailant/s attacked.

Friends and members of the family, including the victim’s father, were in tears when they reached the scene.

As the vehicle was locked, the left rear window was smashed to gain entry into the vehicle to check on his condition before an ambulance arrived to rush him to Miri Hospital.

The tragic incident caused a massive traffic jam as it happened during peak hour. The situation was made worse by the presence of a huge crowd of curious passers-by. The area was quickly cordoned off and traffic diverted.

Miri police chief ACP Mun Kock Keong, who rushed to the scene after being alerted, said the case had been classified as murder under Section 302 of the Penal Code.

“We believe the weapon used is not a shotgun,” said Mun.

This is the second mafia-style shooting to hit the state this month. 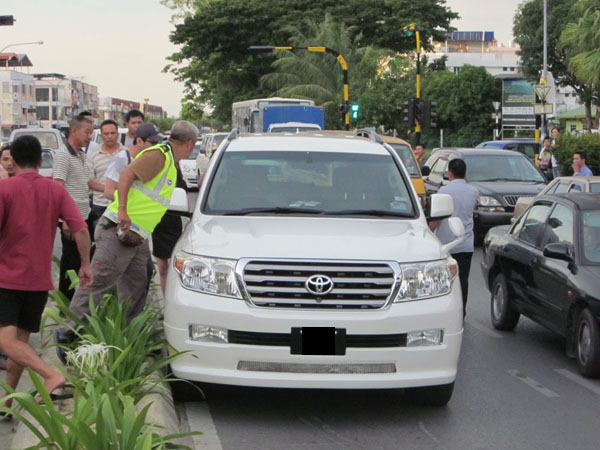 On July 12, two patrons at a restaurant in Green Heights, Kuching, was shot when a gunman, believed armed with a shotgun, struck.

The shot hit Ang Seng Hoon,30, in the head, and he died the following day. Another man, Ho Leong Hee, 60, was hit in the abdomen.

Last week, Miri Mayor Lawrence Lai lodged a police report claiming that he had received a threatening short message service (SMS) on his handphone. The sms asked Lai whether he was scared of guns, and that he would be `the next target’.

Lai, who lodged the report at the Miri Central Police Station last Friday, said he was shocked to receive the SMS on Tuesday.

The fatal shooting here yesterday has sent shivers down the spine of Mirians due to the eerily short interval although it is possibly unrelated.