Wednesday, August 4
You are at:Home»News»Sarawak»Breastfeeding culture low in Malaysia 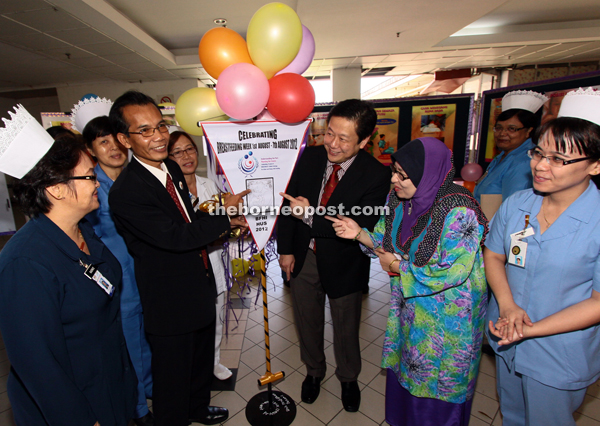 KUCHING: Only 23.7 per cent of babies born in the country are breastfed exclusively for the first six months, and the government hopes to increase this figure to at least 30 per cent by 2015.

The key reasons are that breastfeeding not only helps in the growth and development of babies and protects them against sickness such as bacterial infection, obesity, asthma, diabetes, and heart diseases, but it also protects mothers against risks such as breast and ovarian cancers.

Specialist medical officer (obstetrician and gynaecology) Haris Njoo Suharjono said: “In Malaysia last year, the statistics was 23.7 per cent of breastfeeding exclusively up to six months.

“Exclusively here means there is nothing else except breast milk only.”

In Thailand, only five per cent of mothers breastfeed, while in Vietnam, the rate is less than 20 per cent. In China, the figure is 28 per cent.

Haris added that Unicef’s State of the World’s Children Report 2011 stated that out of 136.7 million babies born worldwide, only 32.6 per cent of them were breastfed exclusively for the first six months.

“Malaysia is also not exempted from this low rate. Our battle now is how we are going to ensure that mothers continue to exclusively breastfeed their babies after they are discharged from the hospital.

“Mothers here are encouraged to breastfeed their babies in the first hours after giving birth. As such, family members and their husbands play an important role in motivating and encouraging them to continue breastfeeding when they are at home,” Haris said.

In carrying out surveys during follow-ups, Haris said when mothers went to the clinics they would be asked about their breastfeeding practices, and doctors and nurses would then give them support and advice.

Haris stressed that it was advisable to exclusively breastfeed for up to six months and continued breastfeeding for two years or beyond together with adequate and appropriate local complementary foods.

Meanwhile, Kuching Division health officer Dr Kamarudin Lajim, who also spoke at the event, said there was a need to promote the breastfeeding culture to mothers, especially from the aspects of the nutritional values and benefits to their babies and themselves.

“The percentage of babies given breast milk exclusively for six months in Kuching is still very low,” Dr Kamarudin lamented.

On another matter, Haris said SGH was accorded the status of ‘Baby Friendly Hospital’ for the first time in 2004, and had successfully retained the status for another two years from Aug 11 last year to Aug 10, 2013.

The Baby Friendly Hospital Initiative (BFHI) is a joint initiative of the World Health Organisation (WHO) and Unicef, and it served as a motivating force for maternity facilities in hospitals to implement policies and practices that support breastfeeding.

Haris said that the BFHI committee here was continuously striving towards ensuring that SGH is truly a ‘Baby Friendly Hospital’ and continue to remain so in future.

“We are currently working towards fulfilling the new revised global criteria to retain the status beyond Aug 10, 2013.”

The theme for the 20th World Breastfeeding Week celebration was ‘Understanding the Past, Planning the Future: Celebrating 10 years of WHO and Unicef’s Global Strategy for Infant and Young Child Feeding’.