Tuesday, August 9
You are at:Home»News»Sarawak»‘Campaign materials must have names of printers, publishers’ 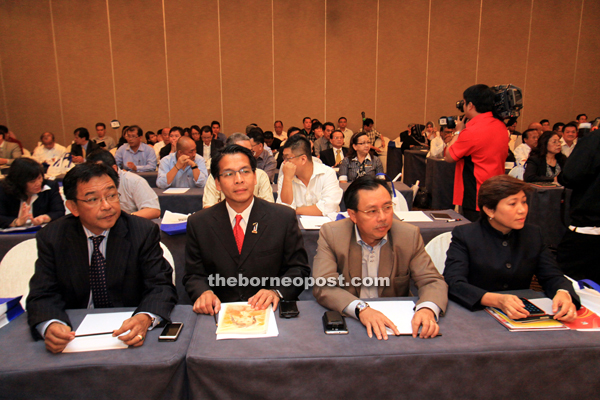 FULL ATTENTION: A section of those attending the EC briefing here.

KUCHING: Campaign materials without the names of printers and publishers will not be allowed in the next general election.

Election Commission (EC) chairman Tan Sri Datuk Seri Abdul Aziz Mohd Yusof said the distribution and display of such materials in whatever form was against the law and perpetrators would be prosecuted.

“Those responsible can be charged under the Election Offences Act. I can’t tell the penalty offhand but if I remember it well it is a year’s imprisonment or fine upon conviction or something like that,” he said.

He told reporters this after a briefing with leaders from the various political parties and media representatives here yesterday.

He stressed that this was among the election laws that they would strictly enforce beginning with the coming general, saying it was what the elected representatives had been asking for.

He explained that they had actually wanted to amend the rules to that effect but was objected by the elected representatives.

“We said it is difficult to enforce the ruling because the materials may have been printed in other countries but that was objected by the elected representatives.

“So since that is what they have wanted now we have no choice but have to enforce the law,” he said.

He explained the move was to check against corruption.

“It was claimed that the campaign materials could involve some elements of corruption where the cost for the printing of such materials could be sponsored by certain people with certain motives.

“So for the purpose of checking by the police or Malaysian Anti Corruption Commission (MACC) and to facilitate their investigation all campaign materials in whatever form must have the particulars of the printers and publishers,” he added.

Posters, banners, leaflets or any other material not having the particulars would be removed and the publishers or the parties concerned would be made answerable, he added.

However, he was unsure whether t-shirts, pens, umbrellas or other similar materials were categorised under campaign materials and advised those in doubt to refer to the Act or contact EC.

Meanwhile, the briefing yesterday was attended by leaders from most, if not all, of BN component parties and the opposition parties.

The objective was to make everyone aware of the new election procedures so that the coming election would be conducted smoothly.