Thursday, August 5
You are at:Home»News»Sarawak»Man jumps off taxiing AirAsia aircraft 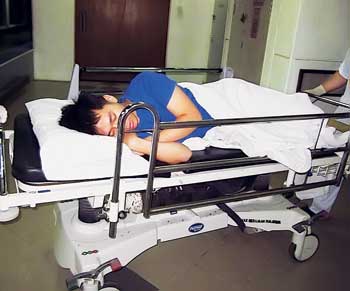 MAN jumped out of the plane was critically injured and was sent to the hospital. –Photo by See Hua Daily News

MIRI: A man jumped out the emergency door of an AirAsia plane here while it was taxiing prior to take off around 7.30pm last night.

The 24-year-old’s antics caused several flights at Miri Airport to be delayed until midnight.

He is believed to be an off-duty crew member of the airline identified only as Chong.

The man boarded the flight headed for Kuala Lumpur together with his girlfriend.

It is unclear what transpired once onboard to provoke his actions.

On-duty flight attendants reportedly said they were powerless to stop him from opening the emergency exit and jumping out once the plane had started to move on the runway.

It is believed that Chong could face legal action.

Previous ArticleLee, Lin set-up dream Olympic badminton finale
Next Article We can be the best