Friday, July 10
You are at:Home»News»Sarawak»We can be the best 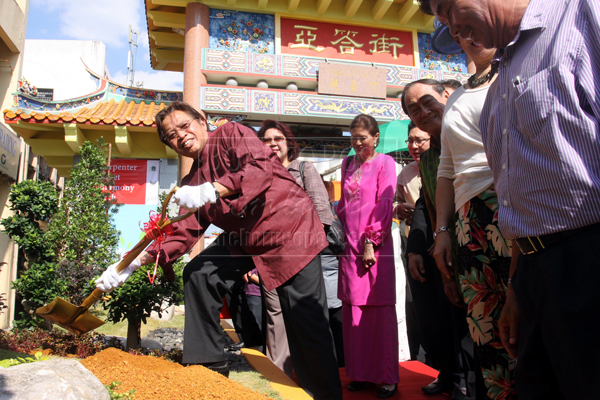 NEW CARETAKER: Abang Johari marks the start of the arch’s three-year adoption scheme by planting a tree at the vicinity. — Photo byJeffery Mostapha

KUCHING: Minister of Tourism Datuk Amar Abang Johari Tun Openg yesterday appealed to Kuchingites not to be sceptical about the government’s plan to transform Kuching into the most attractive and vibrant city in the region.

He said the city, if properly managed, could be even better than Melaka, Penang or Singapore, but for that to happen it required good support from all parties.

Unfortunately, he said, the government’s transformation plans were often stalled by a huge amount of scepticism, particularly among the tenants.

“The tenants will not be happy with us and they will protest against whatever development we put into the city because they are very afraid that once the city grows they would have to pay more for their tenancy.

“These are the scepticism among the tenants that I noticed, but on the part of the government we have to see the long term interests of Kuching city,” he said at the Carpenter Street Harmony Arch Adoption Scheme here.

The scheme is a smart partnership between the Ministry of Tourism, Kuching North City Hall (DBKU), Hotel 360 and Merdeka Plaza. Under the scheme, the arch is placed under the maintenance and care of Hotel 360 for a period of three years.

Abang Johari, who is also Housing Minister, stressed that turning Kuching into a swan would benefit both property owners and the tenants in the long term.

“This is because if Kuching city is vibrant, definitely more tourists will come and spend here. This will bring benefits to the owners and tenants provided they are creative in doing business.”

As such, he urged them to think hard, be prepared for some sacrifices, and to always look at the big picture.

“For Kuching to be better than Melaka, Penang or even Singapore, there must be a vision which has to be undertaken by both the public and private sectors.”

He earlier said a lot of transformations would happen in the old part of the city, such as the Main Bazaar and Gambir Street.

Another plan was the construction of a pedestrian-cum-cycling bridge spanning across Sarawak River near the Waterfront as announced by the chief minister recently.

“This bridge, which will cost a few million ringgit, will enhance the landscape of Kuching Waterfront and give greater mobility to visitors.

“That is going to be something different and may not be seen elsewhere. This is something unique in Kuching because you can stand in the middle of Sarawak River and at the same time can see the Matang landscape, the mountain as well as the surrounding areas”.

He said what would make it more interesting was that few stalls would be found in the middle of the bridge, which means visitors could be enjoying their food while at the same time observe all the happenings along the river, such as the river taxis and sampans.

“All these will become additional attractions for tourists to come here. Apart from that we are also going to promote the city as a place for people to release their stress, meaning to say when people come here they will really feel at ease and all their stresses will be gone the moment they come here.”

He said the project was a part of the Sarawak Economic Development Corporation’s (SEDC) efforts to boost the tourism sectors in Damai and Santubong resort areas.

“The project is still being studied. The Chief Minister (Tan Sri Abdul Taib Mahmud) will make an announcement on that and we are confident that it will become another tourist attraction in Sarawak,” he said.