Monday, February 6
You are at:Home»News»Sabah»Two new priests for Catholic Church
For the freshest news, join The Borneo Post's Telegram Channel and The Borneo Post on Newswav. 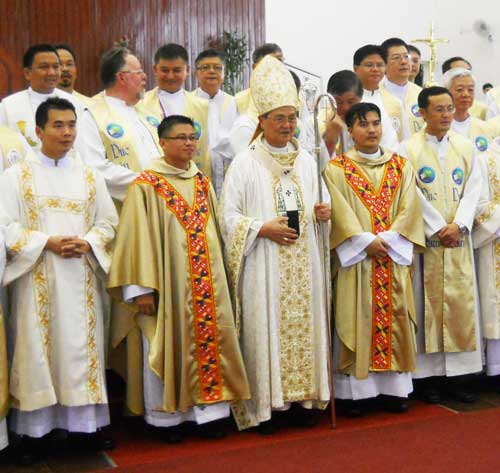 KOTA KINABALU: Over 2,000 Catholics mainly from Telipok, Kinarut, Penampang and Kota Kinabalu, packed the Sacred Heart Cathedral yesterday to witness the ordination of two new priests for the Archdiocese of Kota Kinabalu.

Daniel Dick Jomilong, 39, and Jeffri Gumu, 31, were consecrated as priests at a Eucharist presided over by Archbishop Datuk John Lee, with coadjutor Archbishop John Wong and about 40 other priests from Keningau, Sandakan, Kota Kinabalu and Kuching.

Addressing the congregation and the two candidates during ordination, Datuk John explained the priestly duties to the new priests calling on them to “believe what you read, teach what you believe and put into practice what you preach”.

Later, speaking at the close of the ceremony, he paid tribute to St Peter’s College in Kuching for the work they had done in providing training to the two new priests who received their long years of formation for their priesthood.

“Do not let your formators (lecturers) down. Let them see the fruit of their labour in your serve to the church,” he told the newly ordained young priests.

He also expressed gratitude of the church to the parents of the new priests saying that without them there would not be any new priests.

He extended his welcome to Jomilong and Gumu to the “Sacred Club” of the priestly office in the Archdiocese of Kota Kinabalu, adding that this was a welcome “from the heart”.

Present at the ordination was Father Richard Ng, rector of St Peter’s College, who, in a message for the occasion, had described the new priests as “young, intelligent and energetic” and called on them to lead and inspire the people entrusted to their care with good examples and commitment.

New priest Father Jomilong was born at Kg Mook, Kinarut, Papar and had worked with the Sabah Forest Industries Sdn Bhd in Sipitang and the Department of Minerals and Geo-Science in Kota Kinabalu before becoming an aspirant for priesthood at the Catholic Diocesan Centre in Penampang in 2003.

Father Gumu received his primary and secondary education at Telipok and Keningau before studying at the Kota Kinabalu Polytechnic.

He had worked as a technician for two years with a private firm prior to becoming an aspirant for priesthood in 2003 and entering St Peter’s college for training in 2005.

A luncheon reception was held at the parish centre of the Sacred Heart Cathedral to celebrate the joyous occasion following the two-and-half-hour ordination rites.