Wednesday, February 1
You are at:Home»News»Sabah»Gout sufferer turns to coconut oil for cure
For the freshest news, join The Borneo Post's Telegram Channel and The Borneo Post on Newswav. 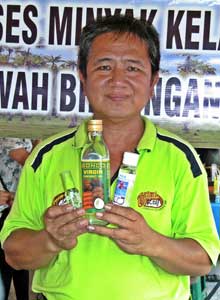 READY FOR MARKET: The finish product is sold at the traditional market or tamu.

KOTA KINABALU: To people in temperate countries, the coconut tree conjures up images of exotic islands surrounded by sparkling seas and bathed in glorious sunshine.

At times though, a vision comes to mind of a coconut falling on the heads of extollers of such ambiences which can inflict considerable pain.

To the people of Sabah, however, the coconut tree is used for practical reasons and viewed as one of the most useful trees in their life for as long as the tree continues to thrive on their shores.

This is because the coconut tree has many uses. The fronds can be made into attap roofs while the trunks can be cut and fashioned into floors on stilted homes — and even walls. The water is a thirst quencher with a pleasant taste and the young kernels are delicious as food.

When a coconut ripens, the white kernel can be scrapped and dry-fried into sweet additives for other foods like dry-fried sago or even ripe bananas. Or it can be squeezed for its milk or santan to be added to food to make it tastier.

The husks can be made into brooms while the discarded shells can be used as “firewood” and many more.

Coconuts can also be harnessed for their oil – usually known as virgin oil. Virgin coconut oil is 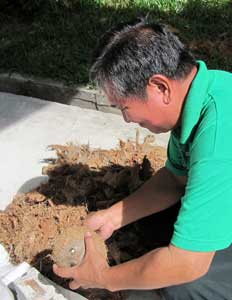 believed to be effective in bringing relief to people who snore as well as moisturising and beautifying the skin.

Whatever the coconut’s claim to fame may be, Ronnie Onginjan of Kampung Kimihang, Kudat, places his faith in virgin coconut oil to deal with his gout problem.

Gout is a painful condition affecting the heels, knees, wrists, fingers and other joints. Prolonged gout may lead to kidney stone formation and subsequent renal problem.

“I suffered from gout for several years and took various medications. There were always periods of relief but not really long. Overall, I was suffering from high blood pressure and was told I might have kidney stones.

“In 2009 I was in a very bad condition. I could not walk and all I could bear to do was sitting down. It was agonising. I was using crutches and relying on my family a lot to help me,” shared Ronnie, a sustenance farmer and self-employed.

The 56-year-old was hospitalised in Kudat for one week. As he could not eat, he was on a drip and could not think of doing anything except pray he would get back to normal.

He thought about a lot of things. People who visited him gave foodstuff and cash donations. He was grateful, of course, but foremost in his mind was getting well.

“I wanted to be with my family and be strong again,” he recalled. 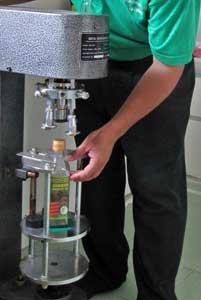 One day, during a visit, a friend named Sopidi Modili from Matunggong gave Ronnie several bottles of virgin coconut oil.

Sopidi asked: “Why don’t you try this and see whether it helps?”

Ronnie did as suggested, faithfully taking a tablespoonful of virgin coconut oil three times a day.

“I knew I was grasping at straws but I was willing to try anything to get rid of the pain. I was not keen on surgery to remove the kidney stone either.”

Ronnie took virgin coconut oil for three months without fail — and is now happy to say he has not been using crutches since.

The ordeal left him with a burning desire to help other gout sufferers.

“Since I have eight acres of coconut groves, I thought why should I leave them untended if I could do something useful with them.

“Yes, I could sell them and make some money but each fruit would fetch just a few cents. It didn’t seem worth it anymore. I no longer felt like lugging them to town to sell them. Besides, I could help people with an ailment like mine if I went further and process the fruit.

“So I talked to friends with bigger plantations and we decided to form a group to produce virgin coconut oil in Kudat. I was very sure it would be a lucrative business and also it would help a lot of people,” he said.

The group approached the Kudat District Officer for help and through him, received assistance from the authorities concerned to open their own factory which started operation in 2010.

In March that year, the factory started production — small but enough to meet orders at the time.

However, Ronnie and his friends had plans for expansion to produce more.

“Twenty five fruits grated and squeezed off their oil can yield one litre of virgin coconut oil. Though it can be tedious obtaining at least 100 coconuts a day. I can do it. If my groves are lacking ripe fruits,

I usually buy from other orchards that might have more than they need.

“I’m determined to make this venture work as I believe it can help others with health issues — if not to cure them, then give them relief in some way,” he explained.

The virgin coconut oil known as Bonco from Kampung Kimihang is sold at traditional markets as well as to walk-in customers.

Ronnie’s project, dubbed A Community Capacity Building Project, is held within the village community under the purview of the Rural Development Ministry, funded by GeF and assisted by Borneo Ecotourism Solution as well as The Gef Small Grants Programme.