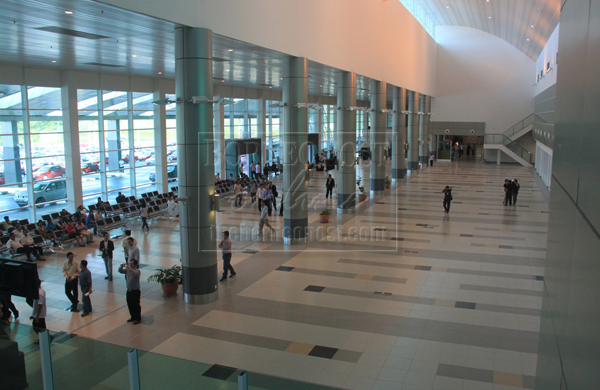 PRIDE OF SIBU: Air passengers are singing praises for the new airport terminal, describing it as more spacious and convenient with impressive design.

This is because it has been received well by local tourism players, who expressed confidence that more exciting development would come with the new landmark.

Describing the airport as one of the best facilities for a town with not more than 250,000 people, they said the new building gave them more confidence to invest in tourism-related activities.

They expressed optimism that this would further elevate Sibu’s status among the world community.

One of them, Equitorial Tours and Travel Sdn Bhd managing director Robert Tan felt the new building would draw visitors from far and near and give them a memorable and lasting impression.

“The new building is considered among the best for a town like Sibu where its population is not more than 250,000. If you look at other places or even overseas destinations such as Hanoi, Vietnam where the population hovers around 70 million, their airports do not have the facilities and the convenience which we enjoy at Sibu new airport terminal.

“Sibu people are indeed lucky and they are appreciative of the effort of the government in providing such facility. Local Government and Community Development Minister and Second Finance Minister Dato Sri Wong Soon Koh has worked very hard in ensuring that the facility becomes a reality to provide convenience for the people and boost tourism industry here.

“With the new airport building, it is a sign that tourism in Sibu is booming,” said Tan, who is a frequent air traveller.

He pointed out that airports play a key role in ensuring visitors have a positive impression of the place they visit because if they are impressed with the facilities they would surely have good words for what they have experienced.

“An airport is the first contact point for tourists and it is here that they develop their first impression of a place,” Tan added.

Towards this end, he suggested that the facility be augmented by showing sport programmes to soothe air passengers should there be flights delay.

This, he noted, was what had been practised in Changi International Airport.

Among other things, he suggested that a fast food outlet be set up there so that passengers have a place to go while waiting for their flights.

Tan figured with such a good facility and the load, more airlines would spread their wings here in time to come.

For starters, he suggested that chartered flights be available to cater for incentive tours.

“The obvious market would be associations or locals.”

“From the look of it, I must say it is very impressive and definitely will give more confidence to visitors. The traffic flow has improved with bigger lanes to convenience the people,” Johnny observed.

He, however, stressed that providing good service was equally important in ensuring visitors have a pleasant experience.

A public member, Kenneth Numan, gave the thumbs-up to the improved facility, saying this would uplift the stature of Sibu.

“This will certainly give better impression to tourists, boosting the tourism industry here. Passenger flow has improved and this will be a new landmark for Sibu,” Kenneth said.

Wong urged the stakeholders, travel agents and Sibu people to make full use of the airport to promote tourism for Sibu and the entire central region.