Tuesday, May 18
You are at:Home»Sports»Pandelela, Malaysia’s first woman to win Olympic medal 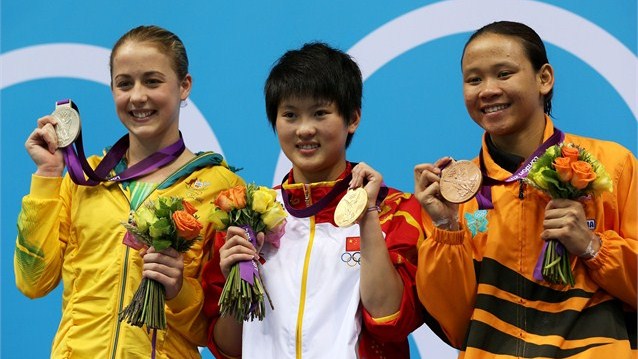 On the podium for gold, silver and bronze winners of the women’s 10m Platform Diving Silver medallist Brittany Broben of Australia, gold medallist Chen Ruolin of China, and bronze medallist Pandelela Pamg of Malaysia on the podium for the women’s 10m Platform Diving final on Day 13 of the London 2012 Olympic Games at the Aquatics Centre. -Photo from www.london2012.com

Pandelela, 19, was in tears as she savored a landmark medal for Malaysia.

“I feel very proud and happy because I just won a medal for Malaysia. It’s really an honour. It’s a great, great thing for Malaysia,” Pandelela said.

“I feel very proud of Malaysia. I hope Malaysia is proud of me.

“Diving is not that popular (in Malaysia) like badminton. I hope I will be inspiring the youth (to take up diving).” 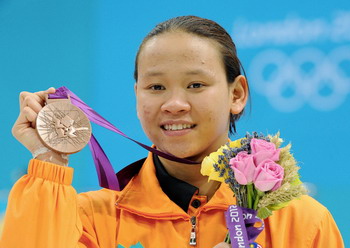 LONDON: On a night which saw the United States pip China in the medal tally, Malaysia moved into a tie for 52nd spot with a silver and a bronze from badminton and diving.

Another silver will hoist Malaysia to joint 46th spot while a bronze will see the country’s position move up to 49th spot.

Apart from Chong Wei and Pandelela, another diver, Bryan Nickson Lomas would start his quest for a medal in the men’s 10m Platform that starts tomorrow.

However, with only three more days before the London Olympics draws down its curtain, Malaysia’s medal hopes will only hinge on diving, especially after Heidi Gan failed in her bid to finish on the podium of the 10km Marathon Open Water Swimming competition that ended today.

Heidi Gan who is based in Perth, Australia finished a respectable 16 in the race won by Hungary’s Eva Risztov. –Bernama 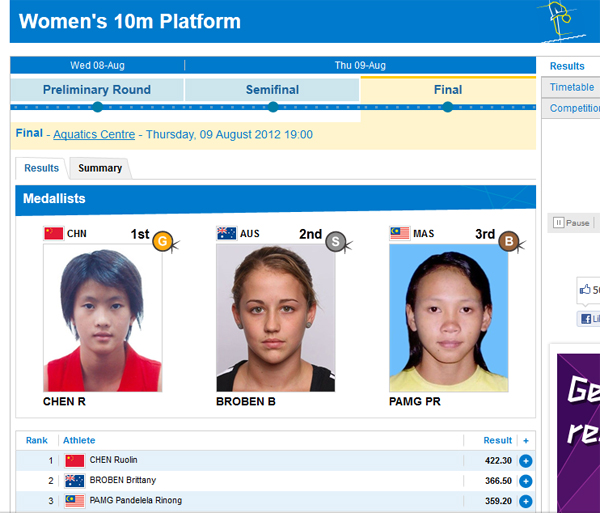 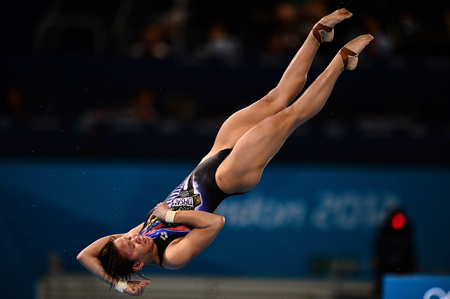 BLAZING THE TRAIL: Pandelela Rinong created history in Malaysian sports by becoming the first woman diver in the nation to enter the final in the Olympics. The 19-year-old from Sarawak competing in her second Olympics finished fifth with a score of 352.50 points in the semi-final of the 10m Platform. The top 12 in the semi-final qualified for the final. — AFP photo