Thursday, December 8
You are at:Home»Sports»Athletics»DECATHLON: Golden night for Eaton 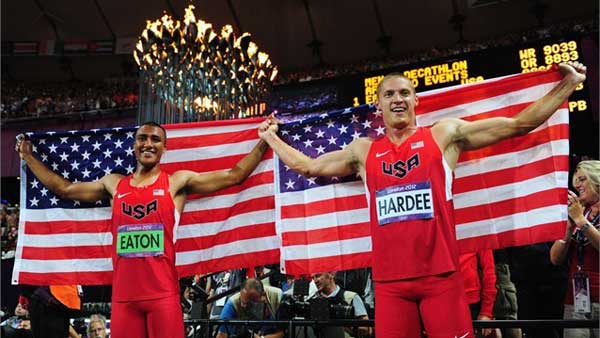 Eaton set the decathlon world record at the U.S. trials in June and backed it up with an Olympic victory with 8,869 points.

Two-time world champion Trey Hardee settled for silver with 8,671 points and Leonel Suarez of Cuba took the bronze, 346 points behind Eaton, at 8,523.

Eaton had a 151-point lead going into the final event, the 1,500 meters, and is a better middle-distance runner than Hardee. But there were still some nerves in the field, with a rare false start in the 1,500.

Eaton needed to slash six seconds off his fastest ever time in the 1,500 to break his world record, but ran a cautious race and finished well outside his personal best in 4 minutes, 33.59 seconds.

It was the first time Americans finished first and second in the event since Milton Gray Campbell and Rafer Johnson in 1956.

“That’s what Trey and I really, really wanted,” said Eaton.

Even Usain Bolt, the star of the night with his convincing victory in the 200 meters, was impressed.

Though the warm-and-sunny conditions in London were far better than the rain, wind and cold at U.S. Olympic trials in Oregon where he broke the record earlier this summer, Eaton fell short of the mark by 170 points.

It wasn’t his goal this time, only to win a medal. And not any medal, either, but gold.

“I’m satisfied,” Eaton said as he struggled to put his accomplishment into words.

So Hardee did that for him.

Given that Eaton is just 24 and heading into his prime, Hardee’s not sure anyone is going to catch up to him anytime soon.

“It’s safe to say my reign is over,” said Hardee. “I still think my best decathlon is ahead of me, but Ashton’s are, too.

“As the days and weeks and months and years pass, I think Ashton and I will look back on this and realize how special it really is and what this really meant (to finish with gold and silver).”

Eaton was consistent over the two-day decathlon. He started off by breaking Bill Toomey’s 44-year-old Olympic record in the decathlon 100-meter dash and took off from there. He also scored the most points in the long jump and 400 meters.

And that was with Eaton taking it easy, too, because he wanted to save some energy for the final two events, the javelin and the 1,500.

“This is super hard to grasp,” said Eaton, who was hugged by Hardee after finishing the 1,500 meters. “For me, I want 10 perfect events. If I really felt like I was the world’s greatest athlete, I’d get 10 great events. But I know that’s pretty much not possible. That’s the toughness of the decathlon.”