Monday, July 13
You are at:Home»Business»Education still a key area of concern for GTP

KUCHING: One sector which remains a key focus of the second phase of the Government Transformation Programme (GTP 2.0) is the education sector, with several key emphasis on improving the standards of education across the ages. 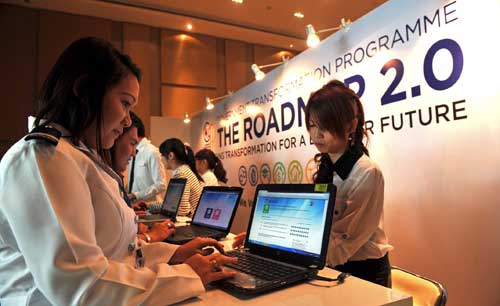 KEY FOCUS: Photo shows some participants providing feedback on the GTP 2.0 during its launch here yesterday. One sector which remains a key focus of the GTP 2.0 is the education sector, with several key emphases on improving the standards of education across the ages. – Bernama photo

Despite vast achievements being made in Malaysia’s education system within the past 50 years, gaps still exist in certain areas.

To rectify this, Performance Management and Delivery Unit (Pemandu) chief executive officer, Datuk Seri Idris Jala, said the GTP 2.0, which was a subset of the upcoming Education Blueprint 2013-2015, would provide coverage on areas such as curriculum and assessment, vocational education, ministry transformation as well as encouraging greater involvement of parents, the community and the private sector in this industry.

Under the first phase of GTP which ran from 2010 to 2012, the government focused on five key areas namely pre-schools, literacy and numeracy, high-performing schools, new deals for principals and a school improvement programme.

From 2013 to 2015, the GTP 2.0 will include two additional programmes – teacher charter and upskilling of English – on top of enhancements to be added to current programmes.

A key concern of many rakyat members was the lack of quality control mechanisms for the pre-school sector.

The government was looking to rectify this by revising guidelines and processes for extending grants to existing operators and vouchers including childcare centres.

It would also implement an inspection and monitoring mechanism and private sector agreement to these standards, in addition to introducing pathways and training vouchers for pre-school teachers.

“As you know, we’ve focused a lot on pre-schooling. This was a big problem for us as only 60 per cent of our kids entering Primary 1 has had pre-school education,” he stressed. “The problem is the 40 per cent who have not been to pre-schools will have difficulties catching up with the syllabus.

“To address this, we have opened a record number of pre-school classes – more than 3,000 classes were opened and an additional 77,000 children have benefited from this programme. There is a massive improvement in the literacy and numeracy of children.”

Another key highlight of the roadmap for the education sector is to deliver one proficient English teacher in every classroom.

Through this initiative, the government will push for teachers to undergo rapid proficiency testing, and consecutively introduce intensive upskilling and immersive learning for all non-proficient teachers in the country.

“We’ve also started ranking every school in Malaysia,” Idris added. “There are 9,814 primary and secondary schools and have categorised them in bands, with Band 1 being the best and Band 7 the worst.

“As a result of the programme, we see a massive improvement in terms of performance of the student outcomes in the exams. In fact, many schools in Sabah and Sarawak had seen improvements in the outcomes of students.”