Tuesday, July 7
You are at:Home»Sports»Watersports»Flag bearer Pandelela plucks a Bronze from 10M platform 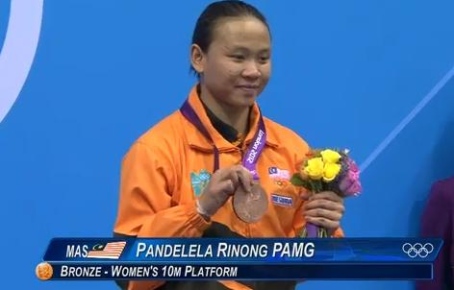 LONDON: The country’s flag bearer in the London Olympics, Pandelela Rinong, lived to expectations by winning a bronze medal in the women’s 10m Platform at the London Aquatic Centre here today, a first for diving.

The 19-year-old Sarawakian who had a poor start managed to claw her way back to accumulate 359.20 points behind Australian Brittany Broben (366.50) and Chen Ruolin of China who ‘ran away’ with the gold after collecting 422.30 points.

After the mistake in the first dive coach Yang Zhuliang told me to forget the mistake and concentrate on the following dive, she said after winning a first ever medal in diving.

“I dedicate this bronze medal to the diving squad because they have supported me all the way. In fact I did not expect to win a bronze,” she said.

The bronze from Pandelela which is worth RM150,000 under the Youth and Sports Ministry’s (Shakam) incentive scheme, added to a silver medal won by shuttler Datuk Lee Chong Wei.

The Sarawakian who hoped her win would inspire other young divers, will also receive a monthly pension of RM2,000.

The silver and bronze also equalled the country’s medal haul since the 1996 Atlanta Olympics.

Her Chinese coach, Zhuliang said he was worried of Pandelela’s condition when she arrived here from China because she looked weak.

“During our training stint in China before the Games, she’s looked strong and determined to do her best in Olympics. I knew, she wouldn’t sleep well.

Last night, I told her to release her tension. May be she really wanted to contribute a medal to the country.

“After the first dive, I told her to focus on the next dive and forget the past,” he said.

Since 1956, only shuttlers in the men’s doubles, Cheah Soon Kit/Yap Kim Hock (Atlanta, 1996) and men’s singles, Datuk Lee Chong Wei (Beijing 2008), have come close to clinching the gold but ended up with silver medals.

The Sidek brothers, Razif and Jalani, contributed Malaysia’s first Olympic medal with a bronze at the 1992 Barcelona Games while their younger brother Rashid took home a bronze from the men’s singles at the same Games. –Bernama