Thursday, July 2
You are at:Home»World»Philippine flood deaths climb to 60 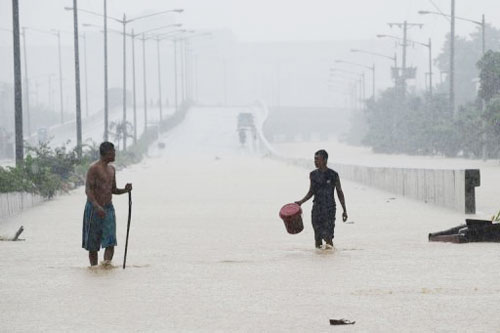 Residents walk on foot over a flooded bridge after a nearby river overflowed in Marikina, a town on the suburbs of Manila. The number of people killed in floods that submerged most of the Philippine capital Manila and parts of surrounding provinces this week has risen to 60, the government said Friday. –AFP photo

MANILA: Weary farmers in the Philippines’ farming heartland struggled amid their worst floods in decades on Friday, as the death toll from torrential rains that also pounded the capital rose to 60.

The floods that submerged 80 percent of Manila early in the week had largely subsided, allowing people to return to their homes, but water remained waist-deep across a huge area of a vital rice growing region to the north.

“We need something to eat. I haven’t gone to work or been paid for a week,” said Rogelio Soco, a construction worker and father-of-three in the small farming town of Apalit, about 60 kilometres (40 miles) from Manila.

Soco, 60, said the floods, which began on Monday, were the worst the area had seen since a huge typhoon struck in the early 1970s, and other locals also said they had not experienced anything like it for decades.

Around Apalit, formerly green rice paddies had been turned into a vast inland ocean of brown water.

Some people stood waist-deep in water and fished in the rice fields as rain continued to fall, while others hitched rides from town to town on government-provided flat-bed trucks.

Nearly two weeks of monsoon rains across the Philippines’ main island of Luzon peaked with a 48-hour deluge earlier this week that battered Manila and surrounding regions.

The government’s disaster co-ordination council said Friday that 60 people had been confirmed killed in this week’s floods, triple the number on Thursday.

The extra deaths occurred mainly in the provinces during the initial deluges from Monday to Wednesday, but government officials in the outlying areas could not immediately report the casualties to Manila headquarters, the council said.

“A lot of them have just reported now because their first priority was response (to the floods),” Anna Orallo, the council’s deputy administrator, told AFP.

The number of people now confirmed killed across the country since the rains first began in late July is 113, according to the council’s data.

Meanwhile the government said it was struggling to cope with the scale of a relief effort across Luzon that was expected to last for weeks.

Tens of thousands of people were continuing to stream into evacuation centres that were already overcrowded and unable to provide enough immediate relief goods.

“The water is still high and the local government units are getting overwhelmed,” Social Welfare Secretary Corazon Soliman told AFP, referring to the farming provinces north of Manila where she was touring on Friday.

“We have evacuation centres that are congested. That is the whole problem.”

More than 362,000 people were sheltering in evacuation centres on Friday, nearly 50,000 more than on Thursday, according to the disaster council.

The number of people officially affected by the floods also rose to 2.44 million, from 2.1 million on Thursday.

The Southeast Asian archipelago endures about 20 major storms or typhoons each rainy season, many of which are deadly.

But this week’s rains were the worst to hit Manila since Tropical Storm Ketsana killed 464 people in 2009.

Environment Secretary Ramon Paje warned that the Philippines must prepare for more intense rains caused by climate change, describing the latest deluge as the “new normal”.–AFP