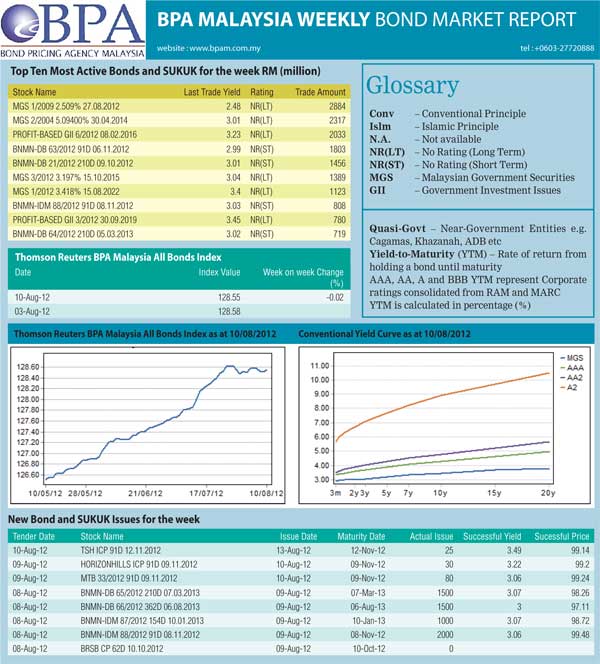 The Thomson Reuters BPA Malaysia All Bond Index inched mildly lower to 128.55 from 128.58 recorded last week. The lower reading was due to overall weakness in the MGS market, in which yields were traded higher between one to four basis points (bps) from five to 20-year tenures.

During the week, Department of Statistics Malaysia released the latest Industrial Production Index (IPI) figure, in which it has risen by 3.7 per cent year-on-year (y-o-y) in June 2012, compared to revised 7.8 per cent reading for May 2012. As usual, the 10 most actively traded bonds this week continued to be dominated by the sovereign papers with combined trade volume of approximately RM15.3 billion. The most heavily traded benchmark bond was the new three-year GII benchmark (02/2016) with registered volume of circa RM2 billion.

On August 8, 2012, the government of Malaysia issued a new three-year GII benchmark maturing on February 2016 which carries 3.235 per cent profit rate. The issuance size was RM3.5 billion. The tender closed on Aug 7, 2012 and successfully garnered a decent bid-to-cover ratio of 1.921 times. The lowest and highest tendered yield were between 3.225 per cent and 3.238 per cent.On Aug 6, 2012, Pengurusan Air SPV Bhd issued RM200 million worth of 10-year sukuk with a profit rate of 3.90 per cent. The sukuk was rated as AAA by RAM Ratings.

On Aug 8, 2012, Sabah Development Bank Bhd issued three tranches of five, seven and 10-year bonds with coupon rate of 4.15, 4.30 and 4.55 per cent respectively. The total issuance size was RM500 million. These bonds were rated AA1 by RAM Ratings.

On the same day, AMMB Holdings Bhd (rated A1 by RAM Ratings) also issued two tranches of five and seven-year bonds with coupon rate of 4.30 and 4.50 per cent respectively.

The total issuance amount for these two tranches was RM1 billion. Additionally, Kimanis Power Sdn Bhd (rated AA- IS by MARC) issued a total of RM860 million worth of sukuk with profit rates ranging from 4.25 to 5.50 per cent. The tenures vary from four to 16 years.

Disclaimer: Information on this page is intended solely for the purpose of providing general information on the Ringgit Bond market and is not intended for trading purposes. None of the information constitutes a solicitation, offer, opinion, or recommendation by Bond Pricing Agency Malaysia Sdn Bhd (“BPAM”) to buy or sell any security, or to provide legal, tax, accounting, or investment advice or services regarding the profitability or suitability of any security or investment. Investors are advised to consult their professional investment advisors before making any investment decision. Materials provided on this page are provided on an “as is” basis, and while care has been taken to ensure the accuracy and reliability of the information provided in this page, BPAM provides no warranties or representations of any kind, either express or implied, including, but not limited to, warranties of title or implied warranties of fitness for a particular purpose, accuracy, correctness, non-infringement, timeliness, completeness, or that the information is always up-to-date.