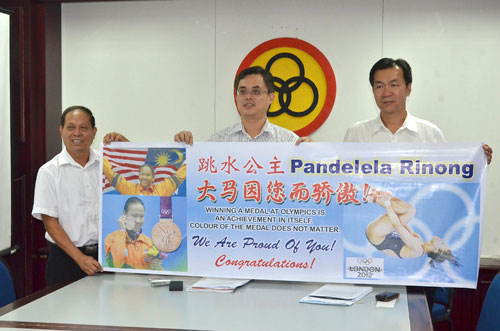 WELCOME THE HEROINE: SUPP Youth chief Tan Kai (centre) and secretary-general Wilfred Yap (right) show the banner for ‘diving princess’ Pandelela Rinong, who created the history by becoming the first Malaysian woman to win an Olympic medal. The Youth section will gather a team to welcome Pandelela, 19, at Kuching International Airport (KIA) when she returns to the state at a date to be confirmed later. They also urge non-governmental organisations (NGOs) to join SUPP Youth to show their support to the diving sensation from Bau.

SIBU: The success story of Sarawak diving sensation Pandelela Rinong in securing the 2012 London Olympics Women 10M Platform bronze continues to draw praises and words of accolades and encouragement from the masses, especially those in the sporting fraternity.

State swimming coach Hii Hieng Chiong narrowed all that down to hard work, discipline and perseverance, without which no athlete can attain success in such a highly competitive international sporting event.

“That is the nature of the sport. As long as an athlete remains dedicated and refuses to throw in the towel, victory is always within reach,” he added.

Pandelela, the flag-bearer of the Malaysian contingents in the 2012 London Olympics had inked her name in the record books as the first Malaysian and Sarawakian to win an Olympic medal.

She beat all odds to bring home the country second medal, after the silver bagged by shuttler Datuk Lee Chong Wei.

Pandelela had been trailing after three rounds but two superb follow-up dives allowed her to finish the five-dive events with a total score of 359.20, third best behind Chinese diver Chen Ruoling 422.30 and Australian Britanny Broben 366.50.

Hii believed Pandelela’s success would eventually inspire a generation of youth to take up diving as a competitive event.

“The diving event was given a huge boost following Pandelela’s success and the Malaysian youth may regard it as a sport that gives them a great chance of winning medals, other than badminton which had traditionally been the only sport to deliver medals. As such, Pandelela’s success could be the turning point for the sport,” Hii added.

Nevertheless, Hii said Pandelela’s victory was not totally unexpected as she had been producing splendid results in the same event for the past years.

At the 2010 New Delhi Commonwealth Games, she won the gold medal in the Women 10m Platform.

Last year, she also created headlines when she collected a silver in the World Series held in Moscow that was participated by most of the top divers.

Hii, Sarawak’s longest serving swimming coach for over 40 years, said Pandelela was fortunate to have a very professional Chinese coach to guide and groom her from a relative unknown into a world renowned diver these days.

When he was attached to the Bukit Jalil Sports School as a coach for the national back-up squad in Kuala Lumpur from 2009 to 2010, Hii said he had noticed Pandelela undergoing tough training regime.

“She is a very hardworking person and has been pumping in six to eight hours of training each day and for the past four years, practicing all those routine diving exercises and performing the different manoeuvres. That is a huge sacrifice and her trials and tribulations have paid off and Pandelela is now reaping the fruits of dividends,” he said.

Hii said Pandelela’s background from the Bidayuh ethnicity had also contributed in part to her success story.

“Her family is not that well off and because of that, Pandelela is willing to sacrifice her time to indulge in training instead of idling her time away.”