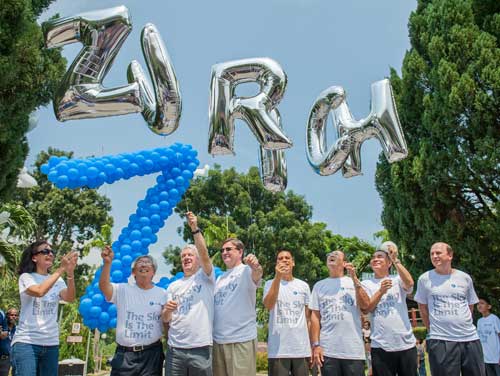 The acquisition set forth a rebranding initiative whereby the company launched a new business expansion plan and a nationwide brand campaign aimed at helping the local market familiarise itself with the international brand name.

“We are working on the positioning of the Zurich brand to the public. We believe that it all starts with our own people,” said Zurich Malaysia chief executive officer (CEO), Chee Cheong during an interview with BizHive Weekly. 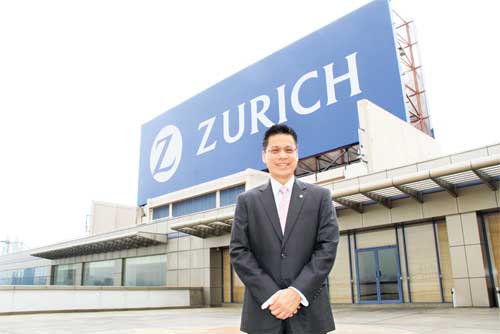 HARD TIMES: Zurich Malaysia CEO, Chee poses in front of the logo. Chee believes that it is a challenging time in the insurance industry and that the players are performing reasonably well at this juncture.

The Zurich brand has been well-established across the globe. First founded in Zurich, Switzerland which still houses the multinational-brand’s headquarters today, the insurance provider has a global network of subsidiaries and offices in Europe, North America, latin America, Asia-Pacific and the Middle-East.

The group now employs up to 60,000 people with presence in 170 countries. Its holding company, Zurich Insurance Group Ltd is also listed on the SIX Swiss Exchange.

With the acquisition, the company in Malaysia can now leverage on the many years of expertise in the industry, Chee  revealed that for the past 10 months, the team at the company had been busy ensuring a smooth integration exercise while rebranding MAA to Zurich. It was a significant team effort, Chee noted, given the scope and scale of the rebranding.

Following the new brand launching on June 23 this year, Zurich Malaysia focused on enhancing the key areas of its distribution model, product offerings and agency development to ‘drive sustainable and profitable growth of the business model’.

“In terms of distribution channel, we plan to adopt a multi-channel distribution strategy to broaden our customer reach,” Chee noted, adding that bancassurance had been identified as one of the key channels which Zurich Malaysia intended to explore.

When asked if he had identified any potential partners to join them on this venture, Chee said that the company was still on the look out in the market, monitoring for potential opportunities on a long term basis.

Another area that the company identified as paramount for the company’s growth going forward would be its agency force.

“Zurich has embarked on a recruitment drive to expand our agency force. We are providing our tied-agents with training to equip them with product knowledge, technical skills, relevant tools and support,” Chee explained, raising the example of their Performance Academy programme for agents.

The transition and rebranding efforts, being  big scale initiatives, had inevitably met with some challenges. When asked on some that the company had faced, Chee confided that the most challenging task was to stay ahead of the competition and at the same time trying to achieve sustainable growth.

“We believe that we are in a good position to deliver strong growth backed by Zurich’s financial strength and global expertise. We aspire to transform insurance from a product-driven industry to a market-driven value creator by understanding customers’ needs, developing solutions for their benefit and serving customers with high-quality standards,” Chee added.

He believed that in order to achieve these goals and the company’s long term aspirations, it would have to focus on improving its operating efficiency through operational transformation.

Another challenge that the CEO listed was getting the organisation to embrace the change. Chee explained that while a change takes time, he was reasonably pleased that Zurich Malaysia had been making strides and was heading in the right direction.

Consumer research had been carried out prior to the rebranding, Chee said, as the company gathered the opinions of customers, agents and other stakeholders on how to approach the change.

It was with their overwhelming support that the change was made. But Chee highlighted that MAA’s strong heritage and local recognition was not to be disregarded.

“There’s a strong awareness of the MAA brand outside of the Klang Valley area which we can leverage to our advantage. As such, our advertising campaigns create a bridge from MAA to Zurich. We have commercials and print advertisements that try to build the bridge and maintain that link,” said Chee, pointing out that all the company’s stationery would have the sentence ‘formerly known as MAA’ printed at the footer.

When asked on his industry outlook in the short term, Chee opined that it was a challenging time for many industries, and the insurance sector was no exception.

“In Malaysia, the insurance landscape has become increasingly competitive. In general, insurers in the country have performed considerably well in managing and responding to the challenges of either lower investment returns or lower interest rates.

“The Malaysian insurance industry has on the whole remained resilient. However, in the medium term, corporate governance and risk management practice will need to evolve to keep up with the pace of the fast-changing environment,” Chee elaborated.