Monday, August 15
You are at:Home»News»Sarawak»Police seize RM250,000 worth of firecrackers 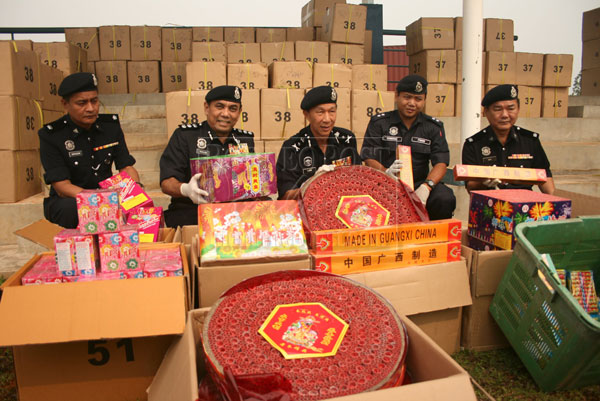 KUCHING: Police made a major bust when they seized a transport container loaded with illegal firecrackers worth RM250,000 from a house at Jalan Datuk Stephen Yong here on Wednesday.

The seizure resulted in the arrest of a local man and five foreigners. They were busy transferring the contraband
from the container into the house when police showed up at 5.35pm.

Sarawak deputy police commissioner Dato Law Hong Soon said the seizure, comprising 513 boxes of various types of illegal firecrackers and fireworks, was the largest in the state so far this year.

“The total value of the contraband is RM250,000, making it the largest seizure in the state this year. The local suspect, 39, will be remanded under Section 8 of the Explosives Act 1953 for further investigation.

“The five foreigners, aged 20 to 32, will be investigated under Section 6(1)(C) of the Immigration Act 1959/63 as they did not have valid travel documents when arrested,” Law said during a press conference at the General Operations Force base in Batu Kawah yesterday.

Some of the firecrackers were believed to have been brought in for Hari Raya, although the majority were likely for next year’s Chinese New Year.

Law took the opportunity to remind the public that it was illegal to sell, possess or let off all forms of firecrackers and fireworks except the ‘Pop Pop’ and ‘Happy Boom’ brands, saying police view the matter seriously and would take stern action against offenders.

He further disclosed that two separate raids on the same day at Ramadan bazaars in Sukma Ria and Kota Sentosa netted 38 packets of firecrackers and fireworks worth about RM3,000.

No arrests were made in both raids as the suspects fled and abandoned their contraband when police arrived at the scene.