Wednesday, May 12
You are at:Home»News»Sarawak»The gift of light 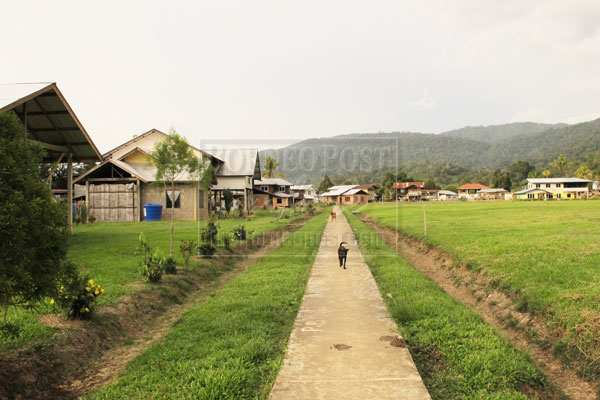 IDYLLIC: The remote yet scenic 19-household village of Long Kerabangan.

SARAWAK may be rich with natural resources like petroleum and LNG, not to mention the cheapest electricity in the region, but 33 per cent of rural Sarawak remains without electricity coverage.

Until July this year, the 19 and 40 household villages of Long Kerabangan and Long Tanid in the Lawas Highlands were part of that statistic, depending solely on diesel gen-sets, kerosene lamps and candles to get by.

Thanks to the efforts of Barefoot Mercy, however, these villages now enjoy 24-hour electricity from modest yet effective 10kW micro-hydro systems provided by the local NGO. 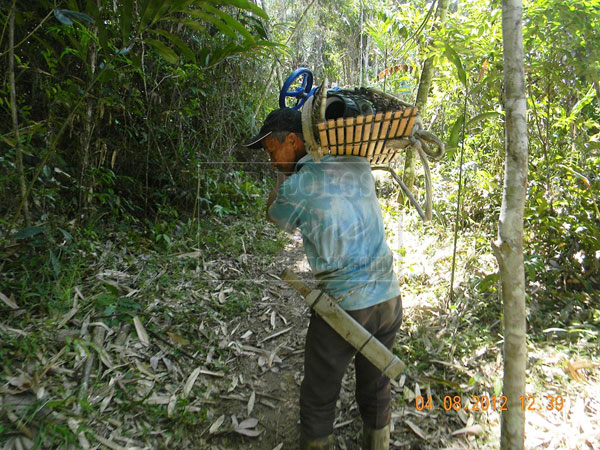 UPHILL JOB: A villager carrying equipment up the hill.

The lack of electrification or access to basic amenities for those in the rural areas became a rallying cry for the founders and volunteers of the year-old Barefoot Mercy. 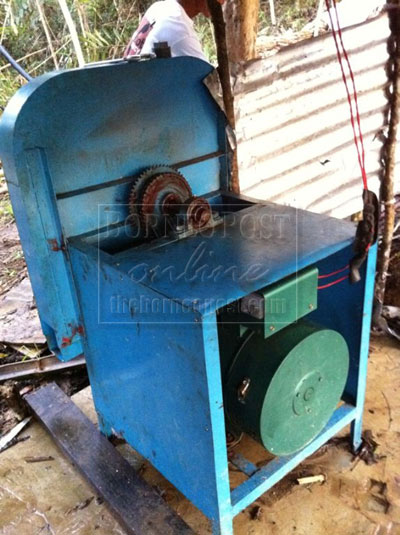 MODEST BUT EFFECTIVE: Part of Barefoot Mercy’s contributions in their rural electrification projects are pipes, cables and turbines like the one pictured here.

“A few of us were discussing how we were in the land of plenty and yet there were people who had no electricity, no clean pipe water or connectivity,” said Anna Wee, one of the NGO’s founding members.

Barefoot Mercy came about as a result of this discussion, the name symbolising the plight of those who are living without basic amenities and access to quality living.

It is an apolitical, local NGO that seeks to address these iniquities by providing access to these basic, yet very essential amenities.

“We want to make some impact for the marginalised and underserved,” Wee said, describing Barefoot Mercy as a citizen’s initiative, where its members come together and contribute their individual and specialised skills to the betterment of the quality of life for rural indigenous communities in Sarawak.

Wee says that the organisation has five core members, with others contributing their time, skills an resources on an ad hoc basis.

Their initial efforts were simple; supplying villages with water tanks so that they would have access to water during the dry season when day-to-day water sources like the river or rainwater may run low.

With funds raised from brunch events in Singapore and Kuala Lumpur last year, they purchased water tanks with the proceeds for longhouses in Kanowit and other areas which still lacked piped water supply.

Later, Barefoot Mercy would learn of micro-hydro systems, which were already being applied in Sabah to great success.

Their next project, ‘Adopt-A-Village’ which carries out rural electrification projects was born, its first participants being the villages of Long Kerabangan and Long Tanid, 100 km out of Lawas town.

“Due to the limited availability of diesel, only the tua kampong has a diesel generator, while everybody else depends on kerosene lamps and candles,” Wee said.

“It’s so sad how the ones with the least financial resources have to pay the most for basic necessities.”

She added that the lack of electricity constrained the ability of the community to harvest viable and sustainable economic activities.

The benefits of electrification, she said, would enable them to expand their sources of income.

“With refrigeration, all meat can be frozen, allowing them to transport it to Lawas where they can fetch good prices.”

Wee envisions other cottage industries that can emerge once villages are hooked up to electricity, besides communications and connectivity. 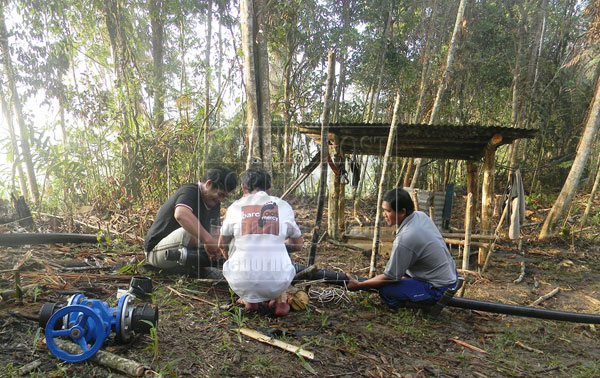 HARD WORK: The villagers and a Barefoot Mercy volunteer carrying out the installation.

Fund-raising began in February, with the projects being mobilised by April and completed by July.

Being remotely located over rough terrain, the villages are further isolated by lack of good infrastructure like roads and telecommunication.

“The piping and cables had to be brought in from KK,” Wee said, adding that the other part of the journey into Long Kerabangan takes five hours by unsurfaced logging roads from Lawas, a trip that requires 4WD vehicles.

Their remote locations make the micro-hydro system the most appropriate answer for the job.

Besides having a minimal impact on the environment, all the system needs is a water source with a vertical drop, and a lot of heart.

While Barefoot Mercy provides the pipes, cables and turbines, putting up timber electric poles and the installation is essentially carried out by the villagers themselves, a process which sees them carrying a 10kW generator over streams and up hills before they arrive at the water source.

“There’s even pictures of them throwing the pipes up the hill,” Wee says with a laugh. But all this effort goes into one very important element: ownership.

“They come to us, they apply, and while our technical partners from West Malaysia will come to assess how to implement the micro-hydro free of charge, we do not encourage a handout mentality,” she said, emphasising how important it was to the success of their project for the villagers to take responsibility of their micro-hydro system.

Prior to installation, village heads must sign contracts that define conditions for use and maintenance.

Once the systems are handed over, Barefoot Mercy’s technicians – all volunteers – train them how operate and maintain the system. 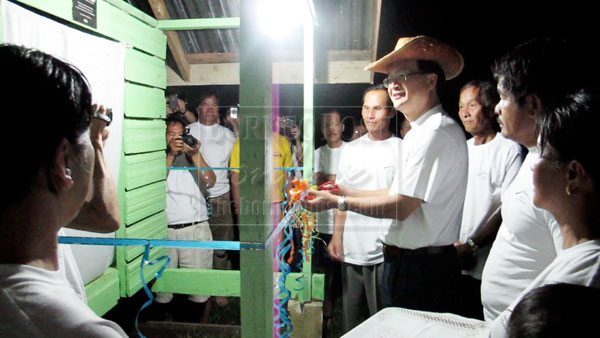 So long as there are villages without electricity, Barefoot Mercy will be keeping their rural electrification programme going.

This Sunday, Aug 26, Barefoot Mercy will be holding a charity dinner at the Pullman Kuching Hotel.

Indicinelive!, a sketch-comedy revue by Kuala Lumpur Performing Arts Centre (KLPac) will be performing at the charity dinner, with proceeds from the evening being channelled towards Barefoot Mercy’s Adopt-A-Village electrification projects.