Thursday, September 24
You are at:Home»News»Sarawak»Walk in the Park 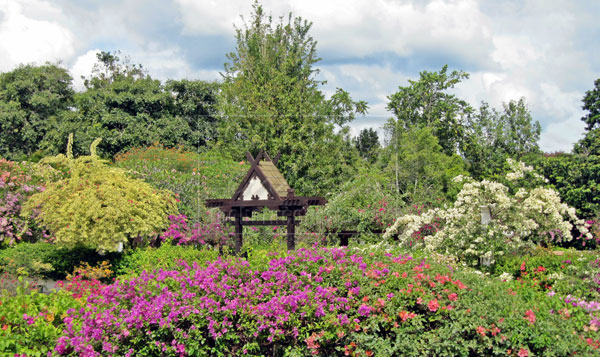 LAGUD Seberang Agricultural Park in the interior division of Tenom is a must-visit for tourists.

Situated within the Park, which doubles as a research centre, are the Native Orchid Centre, the Living Crop Museum, the Ornamental Garden, the Hoya Garden Evolution Garden, the Agro-forestry area and two lakes – Sapong and Rundum.

One can trek along the trails or spend the whole day, admiring the various species of orchids, both natural and hybrid.

Bringing along a guide will enable visitors to understand and appreciate the wonders of Lagud Seberang. 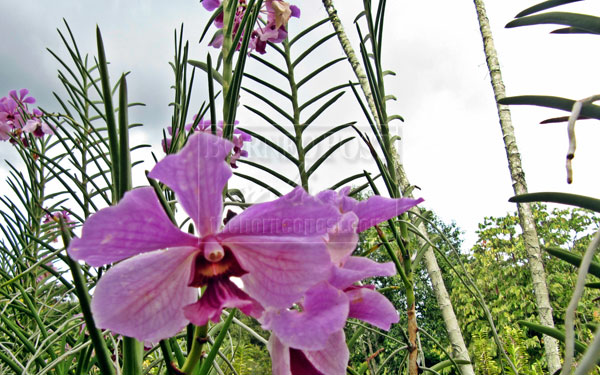 A VARIETY OF ORCHID: An orchid species grown at the garden.

Our guide during an outing to the Park was Alexius Making who showed us the interesting aspects of the place that would otherwise have escaped our notice.

According to him, the Park is located within 500 acres of the 1,500-acre research station, administered by the Agriculture Department Sabah.

It comprises the Agriculture Research Station, the Seed Production Centre for Cash Crop, the Farmers’ Training Centre and Taman Pertanian Sabah itself. 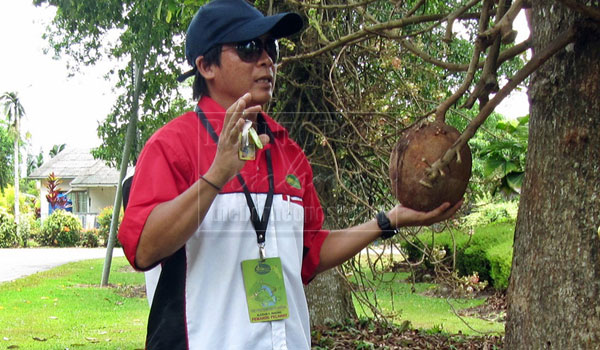 STRANGE-LOOKING: Tour guide Alexius Making holding what looks like the fruit of a strange ornamental tree outside the Hybrid Orchid Garden.

Former Prime Minister Tun Dr Mahathir Mohamad officially opened the Park in 2001 although the public were already able to visit it the year before.

There are visitors throughout the year, notably during the fruit season.

“There is an abundance of fruits to choose from,” Alexius said, adding that the Park also had a wide collection of indigenous and introduced plants species – for instance, the native Orchids of Borneo which were rescued from logged out areas in the forests. 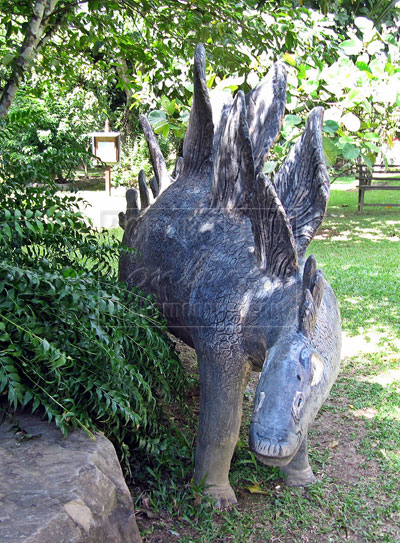 PALEONTOLOGIC: The concrete effigy of a dinosaur.

According to the Orchid Centre guide Samuel Tion, there are about 300 wild orchids with the most fascinating being the Elephant Ears and the Lady’s Slippers.

Some 3,000 people visit the Centre annually.

Meanwhile, Alexius said within the natural orchid garden, there were many other plants, including those previously grown for food.

The four-acre Hybrid Orchid Garden itself boasts 400 species. The colourful hybrids are a sight to behold but they are only for public display as the cuttings are not for sale.

Our next stop was the Evolution Garden which highlights changes in the heritable traits of a population (flora and fauna) over successive generations.

The mutation of genes over time could have resulted in the evolution of certain species or development of new species from existing ones.

A display of the Earth’s formation – from dust to mosses, grasses and trees to dinosaurs – and an interesting transition from one type of vegetation to another can be found in this garden.

The effigies of a brachiosaurus and a stegosaurus – or what look like them – are also found here, towering over some fossil plants and looking almost life-like that one couldn’t help but expect them to roar or maybe just growl any minute!

Made of concrete, these behemoths momentarily transform the visitors back to the paleontological age, and though much is left to the imagination, the beauty of the garden landscape is real – adorned, among others, by huge water lilies, featured in brochures of the Park. 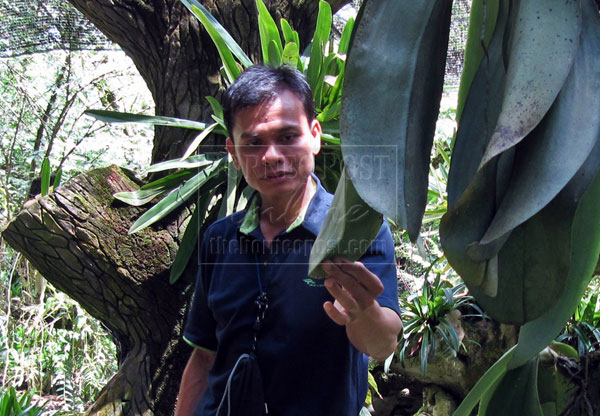 Alexius said these plants produced petals as big as trays and some have been known to grow even bigger.

There are other gardens nearby for photo-shooting opportunities and showcasing how typical home gardens look like.

These gardens, incorporating both natural and man-made items, are actually spaces set aside for the display, cultivation, and enjoyment of plants and other attractions of Nature. 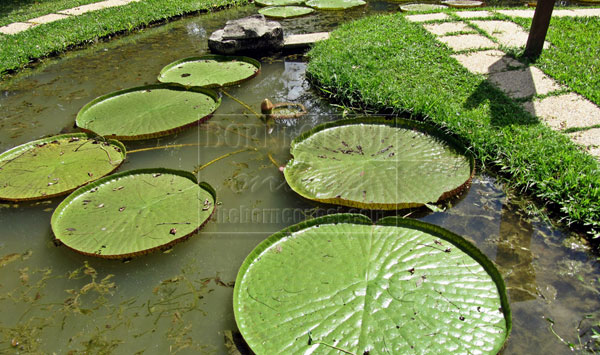 GIANT PETALS: Water lily petals grow to be as big as trays.

According to Alexius, the Park can only be explored if visitors spend at least a day wandering through it. A two-hour stopover barely covers a corner of the area.

Moreover, sudden downpours can also interrupt walk-abouts while getting around in a buggy limits the experience of enjoying the natural ambience of the Park.

Tenom is about four hours’ drive from Kota Kinabalu. Transport is available at the bus terminal near KK’s Merdeka Field.