Thursday, January 21
You are at:Home»News»Nation»Celebrating Merdeka, a tradition in Kampung Paya Guring 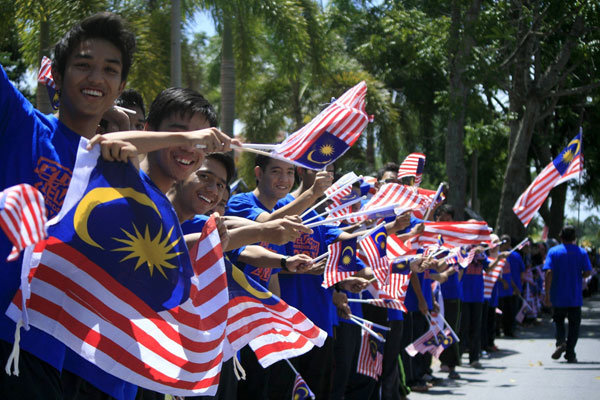 ARAU: The Merdeka Day anniversary celebration in Kampung Paya Guring in Arau, Perlis has been the talk of the town for almost a decade now.

And this year, the 55th Merdeka anniversary celebration started early in July with numerous patriotic events including flying the national flag, Jalur Gemilang.

The Village Development and Security Committee Chairman Romle Hassan noted that celebrating nationhood with a patriotic fervour has been more of a tradition here.

“The main programme here this year was the Merdeka Raya Cycling Tour under the ‘Semarak Merdeka Ke-55’ programme organised by the Information Department,” he added. 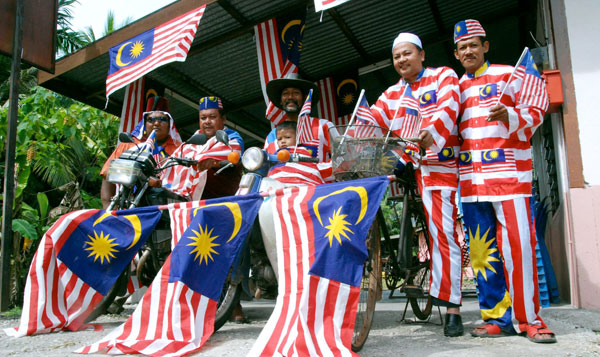 MERDEKA COLOURS: Mohd Ali (right) and Azhar Ismail (second right) together with their friends model ‘Merdeka’ clothes which they will wear during the National Day celebration. They purchased the costumes at RM100 each. — Bernama photo

In both events, apart from the villagers, about 300 students from the Perlis Matriculation College located in the district also participated.

The community tradition here started in 2003 when Romle found that there was lukewarm response for Merdeka Day celebration in Arau.

He had observed that out of the many premises in the vicinity only one was flying the Jalur Gemilang.

“I took my own effort to stitch 10 Jalur Gemilang and joined them together to make a big flag festooned between the rubber trees,” he said.

Initially he feared his noble efforts would be belittled by some but it was otherwise.

In 2004, more youngsters from the village took part in the celebration. The whole village was decorated with flags and bamboo lanterns, all made through the community effort.

The celebration in 2005 was even grander; through community effort a monument resembling the Petronas Twin Towers was built using discarded drink bottles.

More than anything else the celebration here involved people from all walks of life and different races.

The efforts paid off when the village was chosen as the champion of Cheerful Merdeka Contest at the Arau Parliament level from 2003-2005.

Since then the Merdeka celebration has been a calendar event for the village.

Among the main events under the ‘Program Semarak Merdeka Ke 55’ is the 17 km cycling event involving 150 participants across nine JKKK jurisdictions around Arau.

In the selected districts, banners and flags were handed over to the representatives to mark the launch of the Merdeka celebrations at the respective areas.

“This is the testament of the unity of the Arau people in commemorating Merdeka,” noted Romle.

Anuar noted that the cycling event provided the opportunity for both locals and outsiders to learn more of the state apart from promoting cottage tourism products.

Anuar also hoped that the programme could be implemented in a bigger scale in the future with comprehensive itineraries.

Among the places where the cycling tour made a stop is the place where the traditional ‘kuih bahulu’ delicacy is made and the Royal Gallery in Arau.

Romle pointed out the cottage industry tour is vital in exposing the younger generation to the rural community’s potential and traditions.

A matriculation student, Saros Razif Abdul Basar, 18, from Kepong, Selangor found that the programme was an eye opener on the way of life here which he finds something different from other parts of the country.

“This is my first trip to Perlis. My curiosity on the community here was answered through the cycling event,” she said watching closely how her favourite ‘kuih bahulu’ was made.

“All the villagers were proud for the fact that the Information Department had granted them the opportunity to serve as the host for the Merdeka Raya Tour,” Romle added. — Bernama