Monday, November 28
You are at:Home»News»Sarawak»Innovative school welcomes Merdeka in a big way 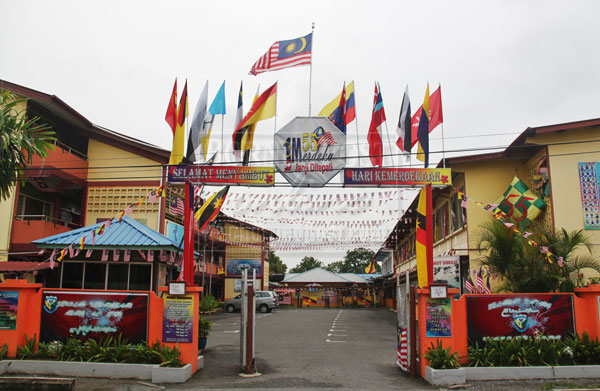 FLYING HIGH: The entrance of the school is decorated with flags.

SIBU: With about 1,000 flags flapping majestically from its classrooms and compound, the patriotic spirit is flying high at SK Abang Ali.

The flags and beautiful decorations are not just a showcase of patriotism, but a testament of cooperation in working towards a common objective among the teachers, staffers and pupils of the school.

Speaking to The Borneo Post yesterday, the school’s senior assistant Adzhar Rabu said without teamwork, the beautiful decorations would not have been done.

“Our headmaster Mahmud Ahad wants us to stay united in doing our job. So when we received any assignment, we must do it wholeheartedly as a team.

“We need involvement from everyone and at the same time, we can inculcate discipline among the pupils and remember our Independence Day,” he said.

According to him, the decoration started earlier this year, but in a small scale.

He said the work intensified this month as the school entered a flag decoration competition as a way to show their patriotism for the country.

On the preparations, he said 60 teachers brainstormed over the project and divided themselves into seven groups — each with its own assignments.

He said from there, they came up with lots of innovative and creative ideas such as making use of recyclable items like bottles, CDs and gunny sacks.

“The big flag, which we display at the school field, is made up of 1,400 plastic bottles, which we — including teachers, pupils and staffers — did about two years ago,” he said.

He said the bottles were coloured and left to dry for a few days.

“Then, we put them together with wires before hanging them on the fence.”

He said it took them about a month to complete the flag.

The flag features distinctively the theme for this year’s Merdeka Day celebration, which is ‘Janji Ditepati’, and the number ‘55’ to signify our country’s 55th anniversary of independence.

They also used bottles to create Chinese lanterns around the school.

Another representation of how innovative teamwork can produce amazing results is the big national and state flags flying high at the school field.

The huge flags were made by teachers of the school’s Arts Club.

“The school provided the fabric, and they sew the flags. Because there were many teachers doing it, the work only took about a week to complete,” he said.

Meanwhile, the school is rolling out competitions such as colouring contest, drawing contest and building objects contest to involve more students in the project.

Adzhar said: “We want everyone to be united regardless of race and religious background. Rich or poor, we must stay united to fulfil our government’s vision.”

Previous ArticleThe moon, you and I
Next Article Sarawak Rangers to hold AGM