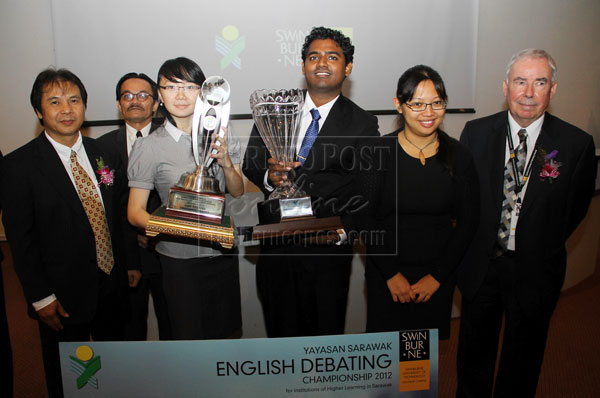 The victorious university was represented by Albert Kamalendra, Teo Ting Ting and Fitriavioani Mohd Khalid who got their message across arguing against ‘Proton should adopt a strategic change by developing cars that run on biofuel’ and defeated Vigneswaran Duraragh, Malcam Prateel Prasad and Nur Hanani Ahmad Shukri of Curtin University of Technology Sarawak (Curtin Sarawak).

On top of that, the sweet victory for the trio, who won a cash prize of RM3,000 along with a trophy, was made even sweeter when Teo was also named the ‘Best Debater in the Grand Final’ bagging herself RM500.

The fourth year mechanical engineering student told The Borneo Post that prior to the competition, the team would practise together once or twice a week.

“As the finals approached, we had intensive training to prepare ourselves,” said Teo, who had previously participated in debating competitions in Sarawak as well as in Peninsular Malaysia.

Meanwhile, an elated Albert expressed his gratification at winning the championship for the first time stating that the combination of hard work and commitment from the team had paid off.

“Obviously, we are very excited to have won the competition and feel very satisfied at the outcome,” he said.

Sharing the same sentiment, Fitriavioani conveyed her gratitude towards the Malaysian Institute for Debate and Public Speaking (MIDP) for their effort in developing debators in the country.

“We would also like to thank Unimas especially the Student Affairs and Alumni Division (HEPA) for their underlying support,” she added.

Meanwhile, Cynthia Sim Shen Duang’s unique method of delivering her speech through rapping and singing on the topic of green technology in the Yayasan Sarawak Public Speaking Competition proved to have won the heart of the judges as the Swinburne Sarawak student emerged as the winner winning herself RM300.

The first and second runners-up places comprising cash prizes of RM200 and RM100 were awarded to Keeshaanan Sundaresan of Curtin Sarawak and Sathisan Moorthy of Swinburne Sarawak.