WHILST removing a fattened sheep tick from my dog’s belly, I remembered the bloodsuckers of Borneo. On a visit to Sapi Island, one of the islands in Tunku Abdul National Park off the coast of Kota Kinabalu, I decided to walk to the top of the island. Deterred by a vicious marauding family of macaque monkeys, I was forced to make a detour only to attract a swarm of mosquitoes. Suffice to say my back poured with blood and the itch was unending. An effective remedy to numb the pain and prevent itching immediately is shrimp paste from a Chinese herbalist shop … a most marvellous concoction. 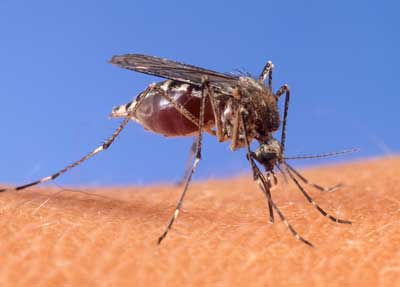 In early medieval times in the Fenlands of Eastern England there was much undrained river water. Mosquitoes bred freely and transmitted malaria to the people there. The climate then was both warmer and wetter than today. Opium poppies were grown in fields to provide temporary relief to malaria victims.

Today midges (mini mosquitoes which do not transmit malaria) are prevalent in some parts of the UK and Northern Europe in summer months. A spray or liquid containing DEET, a chemical, and a mixture of citric acid is a worthwhile deterrent for the female varieties of mosquito that like us.

Equally the zest from orange, lemon and lime peels – all containing citric acid – provide, albeit sticky, protection from mozzie bites. However, prevention is better than a cure and as mosquitoes breed in water, an important component of mosquito control is to keep your house and garden free from standing water. This includes water in flower vases, under potted plants and in any container in which it can collect.

Mosquitoes are flies and are members of the Culicidae family, which contains 43 genera, and so far approximately 3,500 species have been identified. Mosquitoes inhabit a range of ecosystems from the far north, where they are active for only short times in the spring, to the tropical regions. Not all mosquitoes are bloodsuckers requiring a blood meal in order to reproduce. Short-lived males survive on sugary nectar, which females also require for energy. Unfortunately the mosquito species that are vectors for human diseases are also adapted to the ecosystems we create.

Mosquitoes undergo complete metamorphisms with the first three stages, egg, larva and pupa, being aquatic. A female mosquito lays her eggs on the surface of the water. The eggs hatch fairly quickly. In standing water, it is possible to observe the larvae, sometimes called wrigglers, wriggling about. After four instars (moults) the larva then moves into the pupa stage. The pupa hangs at the surface of the water, coming to the surface for air. The adult mosquitoes, which we are familiar with, emerge from the pupa.

Adult mosquitoes have three body parts – head, thorax and abdomen. The specialised mouth parts enable the mosquito to pierce skin and suck blood. Three pairs of wings and legs are attached to the thorax. Female mosquitoes feed on sugary nectar for energy and blood to obtain the protein necessary to produce eggs. They are able to separate their abdomen so that the two meals do not mix.

Recently there has been an explosion of Aedes aegypti mosquitoes that spread dengue fever in the US state of Florida. Some 100 million people worldwide are infected by this disease. This has reoccurred in Florida after total eradication took place 60 years ago.

To combat this recent outbreak, the Florida Keys Mosquito Control District plans to import six million laboratory created male mosquitoes from the UK. Genetic engineering has been frequently frowned upon but in this case a biotechnology company near Oxford University has developed a mutant male mosquito with an extra gene that will cause its offspring to self-destruct within a couple of days of the larva hatching. Breeding in flight with Florida’s females would destroy a generation of mosquitoes.

You may well ask, “Why not use conventional methods of dengue control such as fogging?” Unfortunately the Aedes aegypti mosquito is considered a ‘stealth bomber’ because of its ability to avoid conventional techniques of mosquito control. Its eggs do not hatch in clutches, as do those of other mosquitoes.

With the highest June rainfall ever recorded in the UK this year, bees and butterflies have suffered miserable deaths from waterlogging whilst midges and mosquitoes have survived.

A mosquito is 50 times lighter than a single tropical raindrop so in theory it should be immediately destroyed. However, a recent article in the American ‘Proceedings of the National Academy of Sciences’ revealed through slow motion video that the mosquito’s best defence against rain are its thin body and minute mass. As raindrops hit a mosquito, it turns sideways so that the water travels along its body and falls off. For a further defence against torrential rain, a mosquito is covered in water-repellent hairs but it must keep in the air and resist landing on concrete where it would be battered to death by raindrops descending at nine metres per second.

When I wrote this last month, the most mosquito-infected area in the UK was only 30km from my house in South West England. The mosquito population was unprecedented owing to periods of very heavy rainfall and pools of stagnant water. Residents slept under mosquito nets and shops almost ran out of mosquito repellent sprays.

Next week we will learn more about another bloodsucker found in Borneo.