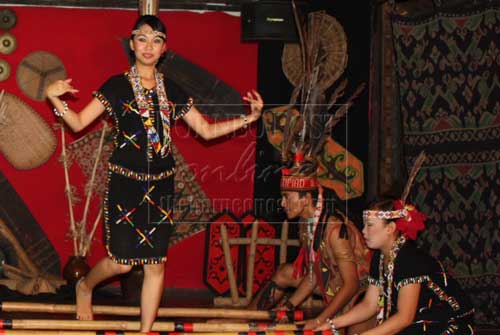 GETTING READY: A Monsopiad dancer rehearsing for the celebration.

KOTA KINABALU: Monsopiad Cultural Village in Kampung Terawi, Penampang, will be holding a Magahavat demonstration and tasting on Sept 8.

Event spokesperson Janet Jibih said the Magahavat celebrates the sago, one of the staples in Sabah.

The sago is cooked traditionally into a sticky porridge, and eaten in small portions with sour soup for a contrasting taste. It can also be made into a type of pancake eaten with grated coconut and sugar.

The sago starch is actually derived from the Sago palm, known as rumbia, rumbio or umbizo to the Kadazandusun.

In the old days when rice became scarce due to blight or some such occurrence, sago was an alternative food. This was especially true during the Japanese Occupation. 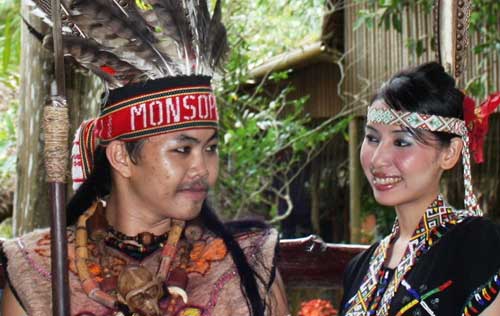 During those lean times, the people would come together and head to the palm tree grove to cut down the tallest trunk. They would then split the trunk in two and put them on a low platform. The pith inside would be pounded and smashed with a hoe and other blunt objects to get at the starch.

The cutters would then sluice the starch with water, allowing it to wash through the pith into a sieve where the pith is left as the starch flows into a container underneath.

The starch, now called sago, is then divided into portions and split among the people who participate in the work. It could be a family of five to a whole village.

To commemorate the usefulness of this food which kept the people alive during the hard times, the Monsopiad Cultural Village has come up with the idea of the Magahavat demonstration and tasting.

The sago starch, made into cakes, porridge or a gummy substance called ambuyat or nantung, is eaten as a treat in this day and age.

“We will be promoting this food to ensure our heritage is perpetuated,” Janet said, adding that it would also be a promotion for the Cultural Village.

According to her, other foods derived from sago is grub, a delicacy among the people.

The grub, locally known as butod, thrives on rotted sago pith and is usually well sought after.

During the event, there will also be traditional dishes like pinasakan, known in any traditional household, and other items like nonsom bambangan and nonsom sada.

One has to visit the village to know and taste them.

Visitors can experience a walk down memory lane with the various old implements and household utensils on display at the village.

Within the enclosure, there are several huts that house artefacts unique to the Kadazan of Penampang.

Souvenir hunters can buy handicrafts, T-shirts and photos of the cultural shows.

“We have traditional dances for our visitors at 9am and 11am. In the afternoon we have one at 2pm and 4pm,” Janet said, adding that the dances are angalang-magunatip, sazau Penampang and Papar.

These three main dances are well known in Sabah.

The village itself thrives on the legend of Monsopiad, the warrior.

According to the legend, Monsopiad was a warrior who used to live in the area. He fought against plunderers who used to cause havoc in his village. The villagers used to suffer, retreat or hide when the trouble-makers came.

Monsopiad took it upon himself to fight against the marauders until he vanquished them. After that, they never returned to the village.

Monsopiad used to collect heads of his enemies which hang from the rafters of his descendants to this day.

He became a hero but his bloodlust overcame him and he began killing for the sake of killing. The villagers had to get rid of him but they will always remember him for his deeds.

To this day, the skulls of those who died at Monsopiad’s hands still hang from the rafters of the ‘house of skulls’ as it is called. And the villagers still dance to the warrior spirit of the man.

According to Janet, efforts are being made to promote the Cultural Village, about 20 minutes’ drive from Kota Kinabalu, as a tourism destination in Penampang.

The village is quite well known among tourists due to its uniqueness.

The magahavat celebration, from 10am to 5pm on Sept 9, also hopes to generate interests among the people in their cultures and traditions as well as promotes them to tourists.