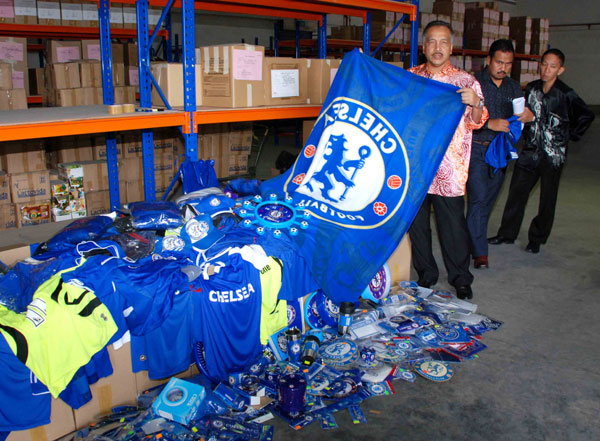 Rosle showing a blanket and other items with the Chelsea brand name that were confiscated from the premises.

KOTA KINABALU: The Ministry of Domestic Trade, Cooperatives and Consumerism (MDTCA) seized 791 fake items with the Chelsea Football Club brand worth RM50,000 in a raid on Wednesday.

The items ranging from jerseys, caps, key chains, bags, lighters, mugs, blankets to many other accessories with the Chelsea brand name were confiscated from a premises in Karamunsing complex around 12.50pm on Sept 5.

MDTCA chief enforcement officer Rosle A Hamid said the raid was made after the department received complaints from a sole distributor in Peninsular Malaysia that the branded items were sold without their permission.

“A 46-year-old local man was also detained during the raid to assist in our investigation,” he said at a press conference at the MDTCA warehouse in Kolombong here yesterday.

Rosle said early investigation believed the fake items were imported from China and sold in the country at a cheap price.

He said the case would be investigated under Section 8 (2) (B) of the Trade Description Act 2011, which provides a fine of not more than RM15,000 for each item or three years’ imprisonment.

He added the department would carry out such raids from time to time and urged the public to inform the department of such activity by calling their hotline at 1-800-886-800.

Rosle showing a blanket and other items with the Chelsea brand name that were confiscated from the premises.