Tuesday, May 18
You are at:Home»News»Sarawak»Good response to anime gathering 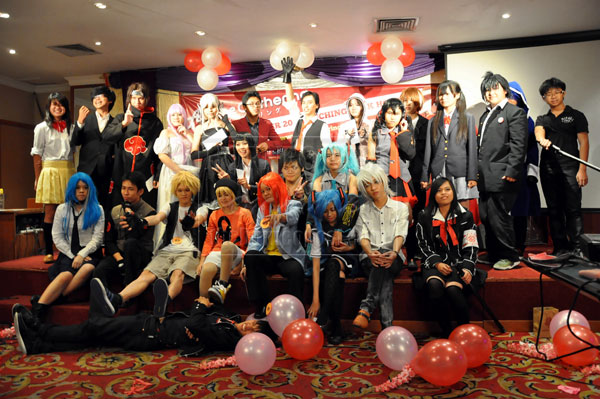 GOOD FUN: The cosplayers in a photo call.

Some 150 turned up for the one-night event, which aimed to bring Kuching’s anime lovers, figure collectors, cosplayers and gamers together.

“We spent a lot of time organising the event and our efforts really paid off as every feedback we received so far was great and positive,” said organiser Carol Chin.

“One particular feedback said that before the event, we were all strangers but now, we are all friends and one big family. After the event, people added each other on Facebook to continue their friendship and interaction.”

She said some attendees agreed to cosplay for the next AG event.

“Of course, there is still room for more improvement and we hope that in the future, we would be able to provide better ticketing system, give better freebies and more merchandise as lucky draw prizes,” she said.

The gathering, a community-driven event organised by fans for fans, was put together by a committee comprising mostly former members of Swinburne Anime and Manga Society (SAMS), a non-profit student club at Swinburne University of Technology.

“We had a section that we called Akihabara Avenue. This was where everything concerning anime, comics and games, including technological gadgets were showcased.

“We wanted to give the attendees the tiniest bit of experiencing Akihabara, a district in Tokyo known for all its anime and electronic goods. There were booths featuring marimo (Japanese moss balls), origami (the art of paper folding), headphones, Gundam figures, dolls and more.” An anime-related band Saichou Neko also held a mini-concert.

“The crowd really went wild for this band of local talents,” said Chee.

She added that the highlight was the Versailles Maid Cafe experience.

“The maid cafe team was also pretty much a success, even though it was their first public appearance and they are still inexperienced in playing their roles as maids. I think that they did a really good job and were really well-accepted by those present,” she said.

The Versailles Maid Cafe was set up to share the Japanese maid cafe concept found in many anime and manga series.

“We got many praises and positive responses from those who attended. Many of them took photos with us and we are really happy to see enthusiastic supporters, even though maid cafe experience is something new in Kuching.

“I think generally people think it is a cafe where the waiters and waitresses dress up in ‘unique’ outfits. Not many understand the concept of a maid cafe, which is really to make customers feel like they are at home and treated like masters and princesses,” she explained.

“To gather a team, I posted up posters around campus and spread the news through Facebook and friends.

“In the beginning, my friends and I had a vision of running our own maid cafe. We started planning a year before we debut. Along the way, we had many obstacles such as finding the right name for our cafe, searching for maids, sponsors and dealing with limited funds.”

She said the name Versailles Maid Cafe was chosen to suit the image of European maids.

“We started out with only three maids but now we have six maids. I hope to recruit more for future events.

“I believe we have much to improve. I think the maids need more training especially in their way of speech,” she said.