Friday, August 14
You are at:Home»News»Sarawak»‘Matang traffic woes to be over soon’ 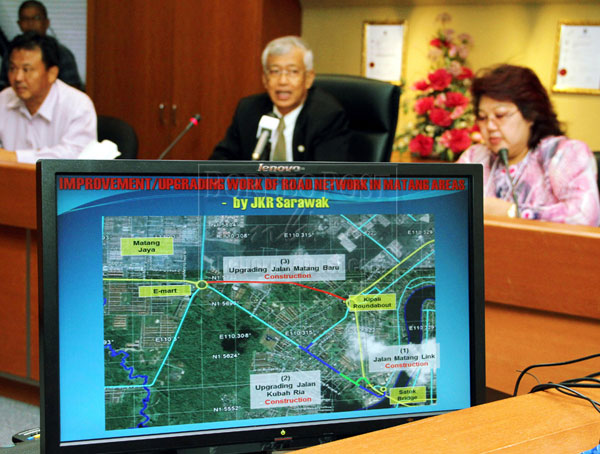 PLEASE BEAR WITH US: Abang Wahab (centre) flanked by Ting (left) and Dr Saadiah at the press conference here yesterday. — Photo by Chimon Upon

KUCHING: People staying in Matang and its surrounding areas will be relieved to know the daily traffic jam they are facing now will be a thing of the past in two months’ time.

Kuching North commissioner Datuk Abang Wahab Abang Julai said this would be made possible upon the completion of the ongoing improvement and upgrading work to the road network in Matang area by end of November.

Affecting areas such as Matang Baru, Kubah Ria and Matang Link, the project is to provide access to Medan Niaga Satok, which will replace the present Satok Weekend Market.

“We fully understand the difficulties faced by motorists using the area and we sympathise with them but at the same time, for a smoother flow of traffic in the area in the future, everyone has to sacrifice.

“We received lots of queries from concerned members of the public and we are pleased to inform them all the three road upgrading projects will be completed by November. That is the assurance given to us by JKR (Public Works Department),” he said.

According to Ting, all the projects costing some RM18 million were expected to be completed within the scheduled completion period.

“So far there is no delay except for the road upgrading construction at Kubah Ria where there had been some slight delay but nonetheless we expect it can completed on time by end of this November,” he said.

To this, Abang Wahab explained that the road construction at Kubah Ria was initially hoped to be completed by now but works had been slightly delayed due to some unforeseen circumstances.

“When the road construction commenced early this year we believed it could be completed in early September but without us knowing it there are lot of underground utilities within the area.

“So for us to remove and redo them it will cost at least several million Ringgit extra so what the contractors did was they tried their best to mitigate the problem, and that was exactly the main cause of the slight delay,” he added.

He said the other reason was the recent festive occasion, whereby many of the workers had decided to prolong their leaves.

On claims by house owners that the road extension project had encroached into their land, he said there was no such thing.

“Based on our record, for some of them it was the house fencings that were encroaching into the government road reserves and not the other way round as claimed by some people,” he said.

However, he said, this was no longer an issue because after being informed the house owners agreed to dismantle their fences in order to give way to the road extension project.