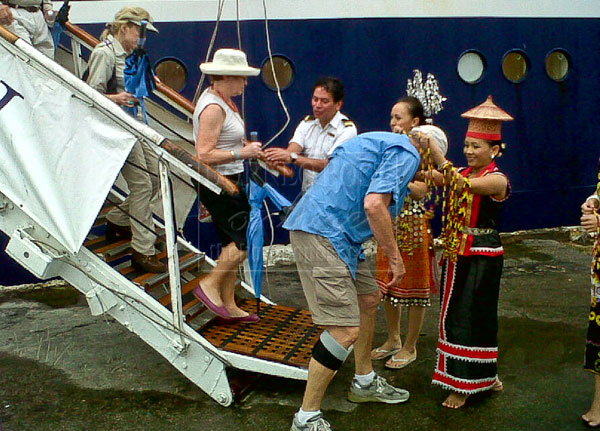 WELCOME TO SARAWAK: Passengers of MV Orion II being garlanded on arrival at Sim Kheng Hong Port in Pending.

KUCHING: Visitors arrivals by cruise ships to the state this year have increased more than 200 per cent from last year’s figure.

Sarawak Tourism Board’s (STB) regional marketing manager Maurice Balang said: “The existing attractions in Sarawak have made this area a ‘must visit’ place for foreign visitors. Since 2007 it shows no failure and one of the reasons is due to the growth of the cruise ship industry in the Asean region.”

Maurice added that the total tourist arrivals through cruise ships in the state had grown from only 1,862 in 2011 to more than 4,000 as of September this year through the main ports in Kuching and Bintulu.

MV Orion II, operated by Orion Expedition Cruises, Australia is the most regular cruise plying the route to the state. Due to its small size, the cruise ship can berth in Sarawak’s shores to allow tourists to visit nearby attractions.

STB sees cruise tourism as one of the potential areas of growth in the state.

“However, this can only be achieved if we have a proper international cruise terminal that can cater to a larger number of tourists. Although the US is currently the world’s largest cruise market, opportunities for the next growth are in Asia which is growing at 8 per cent,” Maurice said.

According to Cruiseline International Association and Euromonitor, between now and 2020, there will be 100 new mega cruise ships (4,000 pax and above) being built and for this reason, China, Japan, Korea, Australia and New Zealand are building international cruise terminals (ISPS compliance) and within our region, states like Penang, Selangor (Port Klang), Sabah and Brunei are also developing and upgrading their new international cruise terminals to cater for mega cruise ships.

“We think there’s a lot of untapped market in cruise tourism for Sarawak because the state is really an ideal destination for cruise tour and value for money for cruise passengers who are mostly senior citizens with the money and time,” said Maurice at the Sim Kheng Hong Port in Pending here yesterday to welcome the 8th arrival by MV Orion II to Kuching.

STB is again hosting the welcoming ceremony with traditional dance and a welcome garland for the 160 passengers mostly come from USA, Canada, France, UK, Germany and Australia.

Passengers later disembarked and joined a tour to places of interest in Kuching such as Semenggoh to see the orang utans and Sarawak Cultural Village.

Previous ArticleCourtesy call
Next Article Forum called off as Anwar, Kit Siang could not make it