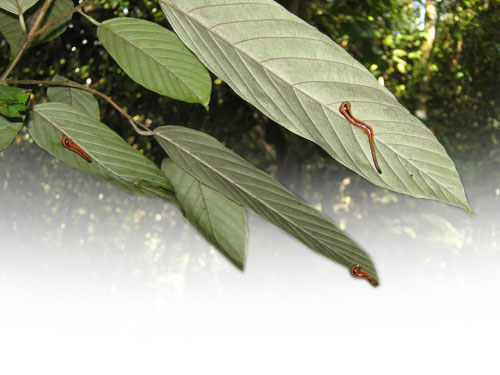 WHILE trekking along the Danum River in Eastern Sabah, a tiger leech attached itself to my bare foot and swelled quickly as it drew my blood. A quick stab of my forefinger nail under its jaws, followed by an even faster flick of my finger despatched the little vampire …  I continued to bleed for nearly three hours and no ointments stemmed the bleeding. A simple remedy hit my mind. What do I do when I nick my face whilst shaving to stem the bleeding? A piece of lavatory paper or a tissue. It works equally well for leech bites.

Leeches are segmented worms in the subclass Hirudinea with 32 internal segments and three jaws responsible for the Y-shaped incision on their hosts. There are two leeches to be aware of in the rainforest. The common ground leech or buffalo leech (Haemadipsa zeylanica) has a painless bite as it injects an anaesthetic with an anticoagulant. The painted or tiger leech (Haemadipsa picta), found on low foliage, gives a sharp bite without an injection of anaesthetic. By nature they are sanguiniverous, feasting as blood sucking parasites thus devouring several times their weight. These jawed leeches or Gnatboballida are extremely sensitive to light and the heat of moving mammals – including humans!

The green, orange and black tiger leech frequently changes its position and explores its environment by waving its head and body. Often it assumes a vertical posture to maximise the sensory structures in its skin. As humans approach, this leech begins an inchworm crawling movement bringing its posterior sucker to the position of its anterior sucker and so on until the anterior sucker touches the unsuspecting host. This leech then injects a secretion in its saliva called Hurudin, a protein that is a non-blood clotting agent.

In humans such a leech bite can bleed from several hours up to a couple of days. Several suggestions have been tabled on the ways to remove leeches using alcohol dabs, lemon juice, salt, Tiger Balm or vinegar. By these methods, a leech would detach itself quickly but in the process disgorges its stomach contents into the wound and hence increases the risk of infection. A far safer method I learned from a Sabahan Murut friend is by digging underneath the leech’s jaws with my forefinger nail and then flicking it off with my middle finger as you would flick a paper pellet.

Unlike the mosquito, the leech is a hermaphrodite with both male and female sex organs and with a part to play in medicine. Its use in the blood letting of patients peaked in mid-Victorian England (1850s). Today plastic surgeons use leeches when too fast a clotting of muscles and skin flaps pose problems to a patient’s recovery.

Do enjoy trekking in the rainforest but remember it is not easy to find leaches before they find you. Upon the advice of an elderly Kadazan tracker, I always volunteer in a group to be the leader through low foliage or the sweeper. Why? The first person disturbs the leaves and the leeches lurch their ways onto subsequent members of the group and with a bit of luck the last person is leech-less.

Leech socks of closely woven cotton impregnated with a chemical certainly provide protection up to the knees. Long-sleeved shirts provide protection against mosquitoes and leeches. A tube of antihistamine cream to dab the wound of a leech bite will prevent itching and all will be well in a couple of days.

Dracula, like vampires in fiction, may have been imagined in Romania but in Borneo bloodsuckers are for real. I hasten to add that I proudly display on my wall a certification that I am now an official member of the Danum Valley Blood Donors Society. All thanks to a tiger leech.

For further reading get ‘A Walk through the Lowland Rain Forest of Sabah’ by Elaine JF Campbell (1994), published by Natural History Publications (Borneo) Sdn Bhd.