Tuesday, December 7
You are at:Home»Business»BizHive»Homestay tourism – a burgeoning sector in attracting more tourists

From an unwanted building to a successful homestay 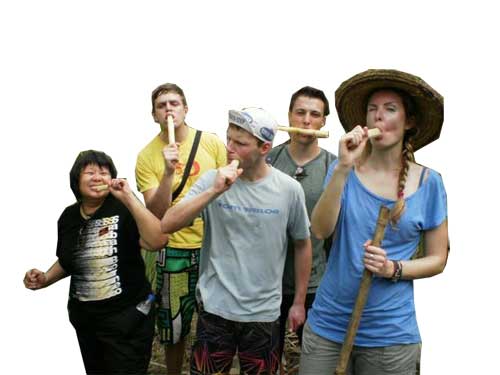 KUCHING: What was once a vacant building that could not attract investors became a ‘silver-lining’ opportunity for businessman turned community leader Temenggong Lu Kim Yong.

This building has now been turned into a guesthouse simply called ‘HomeStay’.

Talking to BizHive Weekly about the myriad of homestay programmes available in Kuching, Lu reeled off saying that as a businessman, one is very calculative and would always think of how to generate income out of the vacant building that was still on loan.

“I’m thinking we should quickly turn the building into a budget guesthouse.

With all the planning and renovation we managed to open the business within six months.

It was officially opened in May 22, 2011,” he explained to BizHive Weekly.

Being a seasoned businessman, Lu said he opened Home- Stay after researching the locality and accessibility, being reasonably happy with its position of being not far from the city centre and Kuching International Airport.

“It is a very conducive locality but the only factor now is that we are still new and many people do not know about our homestay yet.

“That is why we are trying very hard to publicise our homestay through printed media but also through the Internet,” he said, adding that they had developed its website to reach out to more people domestically and internationally.

Through its creative marketing approach and staff efforts, the homestay has seen a very encouraging occupancy rate this year, which reached full occupancy during peak seasons such as school holidays and summer breaks when tourists like to travel.

“If you don’t make advance booking, I’m sorry to say we are unable to entertain your booking when you want to check-in on the spot.

However, during low season our occupancy would be around 50 per cent,” he said.

When asked how many rooms available in his homestay, he mentioned there were a total of 42 rooms which consists of single, double, twin single and twin double bedding configuration rooms.

On average, the homestay was running about 80 per cent occupancy on month-to-month basis which is a very strong indication that the homestay is gaining more acceptance among travellers and locals.

Lu said this new business venture has helped to lighten his financial liabilities but what really appealled to him was the act of contributing towards the tourism industry of the state by offering a reasonable and budget accommodation for travellers.

On the growth of his homestay – whether it is sustainable in the long run – he cited that as a businessman dealing with motorcycles for donkey years, having this homestay was to diversify his family business from traditional way to modern day.

“The tourism sector is a very potential business for any entrepreneur and businessman to try out as the tourism industry is regarded as the top three economic driver of the nation,” he added.

“It is unlimited nowadays in the sense that if the government can open up more air connectivity for more international flights to come in or transit in Kuching International Airport, then we could attract more foreign tourists and business delegates,” he pointed out.

Taking into cognisance the natural eco-tourism attractions such as the lush natural biodiversity, traditional heritage of the different ethnics in the state, the wonders of Mulu and Niah caves, orang utan sanctuary, beautiful resorts and reasonable price of consumer goods and services in Sarawak, the tourism sector has a potentially stellar growth if all tourism stakeholders in the government and private companies champion the need to get more airlines to come in and make Kuching as one of its air routes.

Lu stressed the air connectivity that link Kuching International Airport (KIA) with more air routes needed to be reformed so that KIA could have more direct flights coming in, thus benefiting the people, travellers and giving a boon to the state’s economy.

On the topic of rate affordability, he highlighted that it was not a good thing to jack up rates too high to compete with other homestays or hotels, adding that all players in the industry should be contributing towards the tourism industry by giving reasonable rate with quality services.

“We are operating as a homestay under the homestay license, so we are considered as homestay status whereby we can offer a very affordable room rates complete with convenient services,” he said.

“Nowadays, a lot of tourists like the backpackers are looking for affordability and convenience.

Most importantly, as long as there are good facilities like clean rooms, air condition, free wi-fi internet access in all rooms, private bathroom, TV/ LCD, in room electric kettle and top of the list if the warm hospitality of your workers towards the guests, you can be sure that your guest will always come back again in future and more people will stay with you through words of mouth promotion about the good services you offer,” he elaborated.

“If you invest in a building and offer low rates you can hardly get good returns, but what we are doing is we are making use of our existing building and turned it into a guestrooms, with that we can charge a low rate,” he concured.