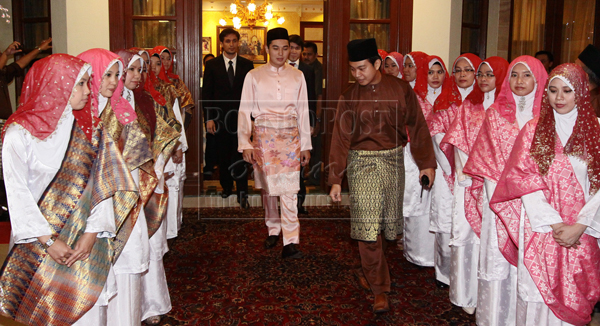 HANDSOME: Dias (in orange) arriving at his engagement. — Photos by Muhd Rais Sanusi

KUCHING: It was a glittering and grand affair at the engagement ceremony of Alia Natasha Geneid and Dias Beibutuly Atamkulov on Monday night.

The ceremony was graced by Head of State Tun Datuk Patinggi Salahuddin and his wife Toh Puan Norkiah, Chief Minister Pehin Sri Abdul Taib Mahmud and his wife Puan Sri Ragad Kurdi Taib, several state cabinet ministers, state assemblymen and politicians, prominent businessmen and other dignitaries, who were all dressed to the nines for the auspicious event. 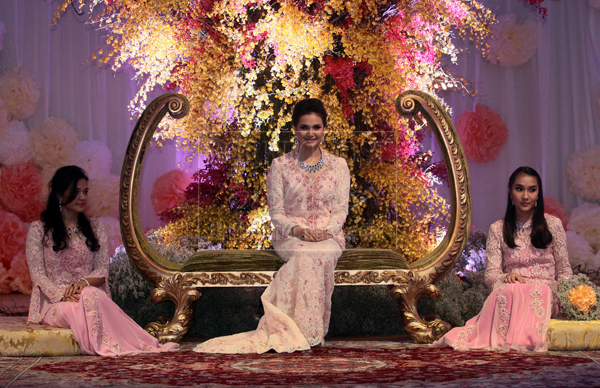 STAR OF THE NIGHT: The beautiful Alia (centre) and her bridesmaids awaiting the start of the engagement ceremony.

Alia, the daughter of Datuk Robert Geneid and Datuk Raziah Mahmud, was officially engaged to her beau Dias, the son of Kazakh ambassador His Excellency Beibut Bakiruly Atamkulov, in a full Malay traditional ceremony.

Once the gifts had been exchanged and accepted, the groom-to-be’s grandmother then placed the engagement ring on Alia’s finger as a symbolic gesture of the engagement.

After the solemnisation ceremony, ‘zikir kesyukuran’ prayers were recited by the zikir group from Jamek Mosque.

The ceremony concluded with a prayer led by the state mufti Kipli Yassin.

The guests were then served with dinner that comprised a sumptuous spread of fine delicacies, catered from the Borneo Convention Centre Kuching here.

They were also entertained by cultural and singing performances.

About 300 guests, many who flew all the way from Kazakhstan, were in attendance at the engagement ceremony that was held at the Geneids’ residence in Demak Baru.