Thursday, October 6
You are at:Home»News»Sarawak»Group of Mat Rempit turn on driver after minor accident 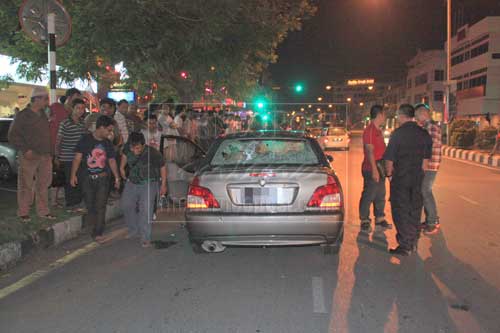 AFTERMATH: The condition of the car after the incident.

MIRI: More than 20 Mat Rempit swarmed a Proton Wira and assaulted its driver after the vehicle was involved in a minor accident with one of the motorcyclists at Jalan Merbau on Friday night.

The victim, in his 40s, was injured on his face and mouth after the attack in front of a hotel at Jalan Merbau five minutes before midnight Friday.

The man and his four passengers were on their way home to Lutong after attending a wedding reception of a relative at the hotel before the accident.

“I made a U-turn at the road junction while a group of Mat Rempit were coming from Jalan Permaisuri – heading in the same direction – when my car grazed one of the motorcyclists,” the Proton Waja’s driver said when met last night.

The angry motorcyclists chased the car for a few metres before overtaking and blocking it. Some of them climbed on its roof and hood and smashed the windscreen with helmets.

The shocked driver came out from his car and asked the men to stop but a scuffle ensued.

“I started to punch one of the guys as they ignored my call to stop smashing my car,” said the driver who ended up assaulted by them.

Police personnel rushed to the scene after receiving a call on the incident.

A police report was lodged at Miri Central Police station.

The attackers fled the scene a few minutes before police arrived.