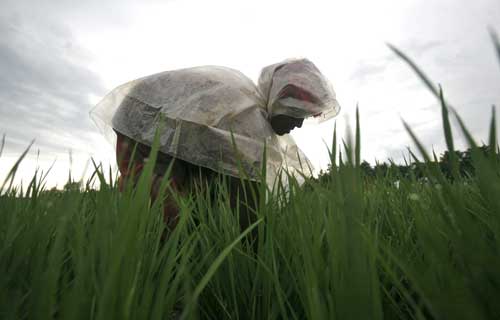 ESTIMATED REQUIREMENTS: A worker covered in plastic works in a paddy field. Currently, Sabah imports some 70 per cent of its rice requirements, which works out to an estimated 220,000 tonnes a year costing more than RM1 billion. — Reuters photo

KOTA BELUD: The district’s status as the rice bowl of Sabah is now further enhanced with the setting up of a granary next year under the 2013 Budget announced by the Prime Minister Datuk Seri Najib Tun Razak on Friday.

Deputy Sabah UMNO chief Datuk Seri Salleh Said Keruak believed this addition, plus other incentives for paddy farmers, would go a long way towards increasing output and upping local production to 50 per cent over the next five years.

“This is good news indeed for us not only in Kota Belud, but the whole of Sabah. In fact, ensuring food security is a vital aspect in any developing country.

“Sabah is a major agriculture producer, but sadly, our focus does not seem to be on paddy. Rice is our staple food and we actually have the land to cultivate more paddy. Perhaps it is time to rethink our strategies on how to maximise usage of our available land for paddy cultivation,” he told Bernama, here yesterday.

Currently, Sabah imports some 70 per cent of its rice requirements, which works out to an estimated 220,000 tonnes a year costing more than RM1 billion.

When these granaries are opened, they will be gazetted as Integrated Agricultural Development Areas.

Apart from Kota Belud, the others are in Batang Lupar (Sarawak), Rompin and Pekan (Pahang).

In this aspect, Salleh urged the people who had abandoned their paddy fields for various reasons, to either reopen them or seek assistance from government agencies such as Sabah Land Development Board (SLDB) to till the land.

“I understand SLDB has successfully rehabilitated abandoned paddy farms in the Membakut area, and participants in their schemes are now reaping the benefits,” he said.

Salleh said many farmers gave up paddy planting as they felt it was not worthwhile to indulge in such activity, while their children were not interested to follow in their parents’ footsteps.

He said the time has come for landowners to pool their land and invite big companies capable of developing their land into large-scale farms as joint venture partners, stressing that with modernisation and better mechanisation, yields would be higher.

“Of course, we need fast growing and high yielding strains of paddy to improve production per hectare and make it all the more worthwhile and profitable – this can only happen if our farms are large enough,” he said.

Touching on the other aspects of the Budget, Salleh described it as one that should be appreciated by the majority of the people.

“The BR1M 2 payout, additional pension, book vouchers for students, tax incentives for the oil and gas industry, discounts for the ferry (Labuan-Menumbok) users, among others, confirms Najib’s sincerity to help all levels of society.

“The allocation to open up more Kedai Rakyat 1Malaysia (KR1M) where subsidised consumer durables could be purchased, would especially help the lower income group affected by the rising cost of living,” he said.

He said that more goodies could be expected from a Barisan Nasional government as Najib was a man of his word, and when he pledged projects, he made sure it was delivered.

However, Salleh admitted he was a little disappointed that Sabah was not mentioned for more affordable housing, and he urged Sabah Members of Parliament to raise the matter when debating the Budget in the coming days.

“Perhaps it was an oversight, Sabah too needs more affordable housing in strategic locations in our towns as the spiraling cost of landed houses are just beyond the means of our young today.

“The federal government must ensure its affordable housing programme reaches out to as many people in Sabah, and complement the state government’s own efforts in providing housing to the poor and hardcore poor,” he added. — Bernama