Saturday, August 15
You are at:Home»Columns»Other Columns»Penchant for painting Mount Kinabalu 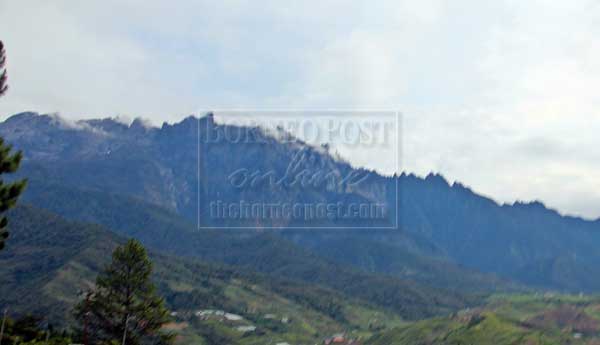 MOUNT Kinabalu is one of the most painted landscapes in Sabah – so it is not surprising to see images of the highest peak in Southeast Asia on canvas in homes, coffeeshops, offices, different establishments and not forgetting, of course, the Sabah Art Gallery.

Benedict Chong, a very talented artist, loves painting Mount Kinabalu. The 62-year-old, born in Menggatal but now resides in Kota Kinabalu, has many a tale to tell about this majestic looking mountain, considered sacred by locals, and he is very articulate about it.

“When I was younger, I worked for Telekom and used to go to the station at the Kinabalu Park almost every month, and at times I stayed there for weeks. In those days, we walked up to the station and on the way, I saw beautiful Nature around me.

“I used to observe the mountain and look at every aspect of it. I learned its contours and the way it seemed to reach up to the sky. It was beautiful, the crevices and little nooks around its surface.

“I think that’s why I paint it so much. I also notice the mountain looks different from different places. If you look at it from Kota Belud, it is different from what you see in Pekan Nabalu or Kundasang. The angles are always interesting to explore — and paint, of course,” he shared.

On how many paintings he had done of the mountain, he pondered, shook his head and said: “Hundreds.”

According to him, some of his Mount Kinabalu paintings could well be adorning living rooms and galleries in China, Japan, Taiwan, Brunei and Australia.

“Sometimes, our VIPs, visiting other countries, ask me to paint for them as they want to present the paintings as sourvenirs to their hosts. Sometimes, I give away some as souvenirs too while managing to sell some.”

Benedict is one of the participants in the Invitational Artist Exhibition, organised by the Sabah Art Gallery recently where he exhibits his Lepa-lepa artwork.

It’s far from being his first though as he has been exhibiting his works since 1970. His first solo exhibition was in Hong Kong. In 1971, he exhibited in Brunei, followed by Seria in 1972 and Kuala Lumpur in 1975. 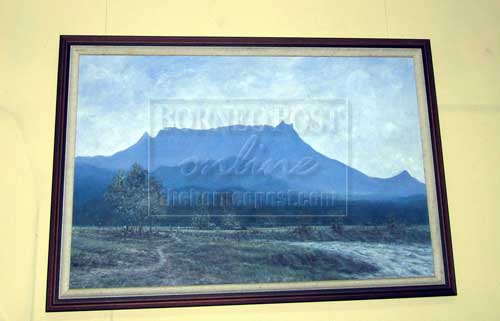 A painting of Mount Kinabalu by Benedict in the Art Gallery office.

He held his first solo exhibition in Brisbane, Australia, in 1979. Several others that followed include those in Kota Kinabalu (1981), the Chinese Chamber of Commerce in Sabah (1983) and the Sabah Museum (batik painting) in 1985.

In 1991, he held batik painting exhibitions in Otawa, Toronto and Vancouver in Canada, and also in Los Angeles, USA.

In 1993, the Tales of Borneo exhibition, comprising original paintings by Benedict, was launched and a year later, he took part in the Water Colour Open Exhibition and the Invitational Paintings Exhibition at the Sabah Art Gallery.

In 1996, he held a batik painting exhibition in Queenland, Australia, following up in 1999 with a solo exhibition themed Sweet Inspiration of Borneo at Shangri-La’s Tanjung Aru Resort in Kota Kinabalu.

In 2000, Benedict put up a solo exhibition to raise funds for St John Ambulance Malaysia at the Sabah Art Gallery and four years later, he was an invited exhibitor at the same venue.

A non-conformist, he has his own styles and, in his own words, will never copy others.

“I believe in taking pride in my work and I don’t conform to other people’s styles simply because everybody is supposed to be doing the same thing. I know there are many talented artists out there who have their own approaches,” he said.

Benedict does not believe one should paint a durian, mount it, call it art and demand thousands for it, saying there has to be more than just a durian on canvas.

He also suggested veteran artists be given the chance to exhibit their works more frequently as this would serve as a source of income for them.

“They should be given recognition as the pioneers of art in this part of the world. Don’t forget them just because they are aging. If at all, they should be lauded for their wealth of experience and talents.”

He is right, of course, because the new crop of artists will not be there without the veterans who are the trail-blazers after all.

As for Benedict’s Mount Kinabalu paintings, they will always be there to glorify the mystical and sacred mountain.