Thursday, July 7
You are at:Home»News»Sarawak»Sarafield launches The Hub @ Matang 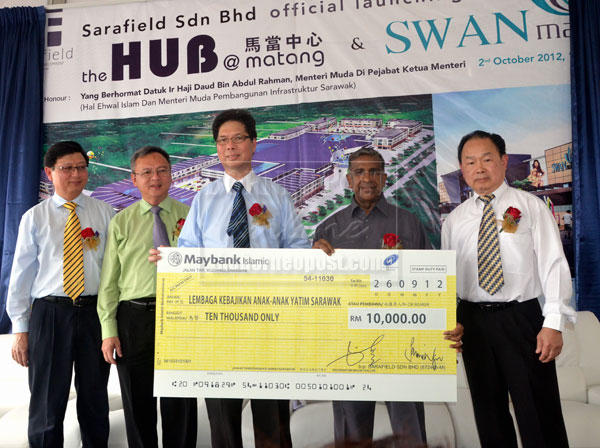 The Swan Mall would have an anchor supermarket and department store as well as the Matang area’s first air-conditioned food court.

There would also be an event space of over 10,000 square feet at the mall’s centre court.

Sarafield chairman Dennis Ling said the development is set to serve residents in Matang and other areas of Petra Jaya.

“The landmark project will be completed within 30 months. Even before the launch, about 85 per cent have been sold.

“The shop lots are arranged in such a way that they face the main road. This is to capture the maximum frontage,” he said.

Landowner Dr Robert Wong, who is also a company shareholder, said he was presented with the project blueprint a year ago.

“I was impressed by the blueprint that Sarafield presented to me. The development of this piece of land is very close to my heart as it was a pledge to fulfil my late father’s wish.

“It is also my wish to leave a tiny footprint in Sarawak by helping to develop this part of Matang and provide modern facilities to the residents here,” said the former medical practitioner, who now resides in Australia.

He said the land, which is located beside the Jalan Matang roundabout, has an interesting history.

“This land was passed down to me by my late father Wong Ah Swan, who came to establish himself in Kuching as a poor teenager. He bought the land for only 600 dollars that time.

“Even though it was considered quite far from town, my father always reminded that the land must be developed. He strongly believed that development would come to this part of Kuching,” said Dr Wong, who added that the mall would be named in honour of his late father.

Sarafield later presented an RM10,000 donation to Peryatim, of which Daud is chairman.

To mark the launch, Sarafield offered a 4 per cent early bird discount to those who purchased The Hub @ Matang units yesterday.