Tuesday, June 15
You are at:Home»News»Sarawak»Strive on despite lack of facilities, teachers and students told 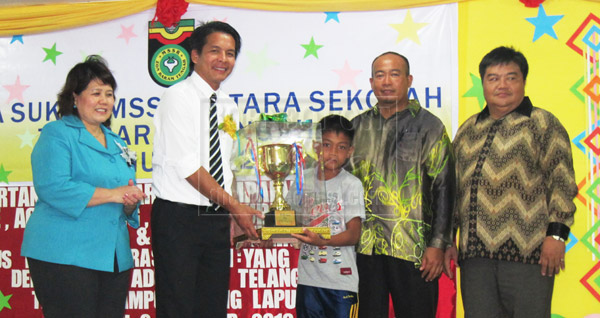 LONG LAPUT, Baram: Teachers and pupils in Baram have been told not to be disheartened by the lack of teaching and learning facilities in their schools.

Admitting that most schools in the district had inadequate facilities unlike those in urban areas, Telang Usang assemblyman Dennis Ngau said the government was aware of the shortcomings and had taken measures to ensure that lessons were not interrupted.

“You should not be discouraged and disheartened because of all these. The lack of facilities should fuel your determination and aspiration to be on par or better than schools and students in urban and sub-urban areas,” he said at the closing ceremony of middle Baram zone Primary Schools Sports Council sports carnival at SK Long Laput Baram recently.

To achieve this, Ngau reminded them to be focused in their tasks and studies despite the inadequacies.

At the same time, he advised parents to take their children’s education seriously and monitor their activities.

“Don’t take it lightly when it comes to education as it will bring socio-economic changes not only to the family but also the community and the area as a whole,” he emphasised.

A total of 13 primary schools from middle Baram took part in the annual carnival which is to scout for representatives from the zone to participate in the Baram District Primary School Sports Council (MSSR) sports carnival next year.

SK Long Laput emerged as the overall champion of the carnival which featured track and field events, games and cultural events.

On the district, Ngau assured that its future would be bright through the development master plan being implemented by the government, adding although it was not directly under Sarawak Corridor of Renewable Energy (SCORE), the area would also be getting some spinoffs from its development.

He also assured that the people in the district would have easier access to Miri as the government would be taking over and upgrading the timber roads.

“The roads will give spur to more economic and agricultural activities by which the people can improve their livelihood.

“Tourists will also be attracted to the area due to its rich culture and heritage in addition to the rapids and jungles,” he added.