Sunday, June 13
You are at:Home»News»Sarawak»Unimas students enter book of records in caving expedition 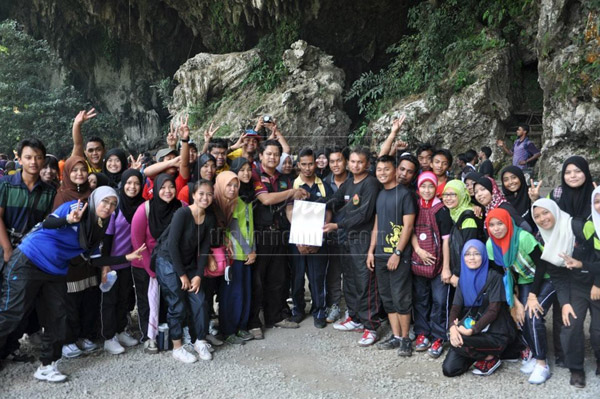 SUCCESS: Jubilant students at the end of their record feat at the Fairy Cave, Bau.

KUCHING: The Universiti Malaysia Sarawak (Unimas) Reserve Officers Training Unit (Palapes) marked a milestone when its members entered the Malaysian Book of Records by holding the ‘Largest Participation in Caving Expedition’ at Fairy Cave on Oct 5 to 6.

With a total of 751 participants consisting of Unimas students, the event started at 5pm with the first group set out to mark the path along the cave, which took over one and a half hours.

The last group of 149 set off the next day and came out of the caving expedition at 7.53pm.

The expedition set the record that was registered under 28 hours and was participated by students from eight faculties.

Programme director Abdul Rahman Nanyan said the success is a major achievement for Unimas and is a benchmark for others to break.

The event was jointly organised with the Unimas 16th convocation committee.

Previous ArticleStrive on despite lack of facilities, teachers and students told
Next Article M’sia aims for 5.5 pct energy from renewable sources