Wednesday, February 1
You are at:Home»Features»Whispering Hope
For the freshest news, join The Borneo Post's Telegram Channel and The Borneo Post on Newswav.

A YOUNG Kelabit girl cried for days when she could not further her education in Marudi. Elsewhere, the Bario Government Secondary School had been set up and she was to join the first Form 1 batch in the new school with the rest of her Bario Primary 6 peers. 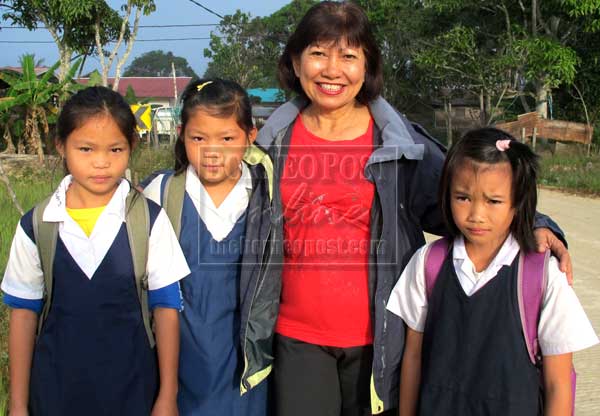 NEW HOPE: Rokiah with the Penan children she met while they were walking to the school.

She felt as if her dream of joining older relatives in Marudi and Miri were dashed. However, three years later, upon completion of her Form 3 in Bario, she moved further afield – to study at St Teresa’s School in Kuching.

Her life from thence would be fairytale-like. And dearest to her heart, she was able to help her family in ways she never dreamed of. Instead of becoming a doctor herself, she married a doctor and not only brought up all her younger siblings but put them through college and university. Now, after bringing up her own two children it is time for her to do something for her community in the Bario Highlands.

This is the story of a Bario-born Kelabit lady, PDNR Datin Pearl Jai Mohan (PJK) and District Extension chairman (2012-2013) of Inner Wheel District 330. In West Malaysia, she is often mistaken for a North Indian lady because of her name and their unfamiliarity with the Kelabit ethnic group.

Recently, she and her friends went to Bario to carry out an Inner Wheel Whispering Hope project. They donated six large boxes of materials, including pencil cases and other items, to the Bario Primary School students.The excess luggage (for the donation) charged by MAS was RM300.

Headmistress Dora Tigang was delighted to host a special morning assembly to welcome the three Inner Wheel members – Pearl herself, Rokiah Abdul from the Kota Kinabalu branch and Florence Enau, president of Sarawak Inner Wheel. In Bario, they were joined by Inner Wheeler Joanna Joy. 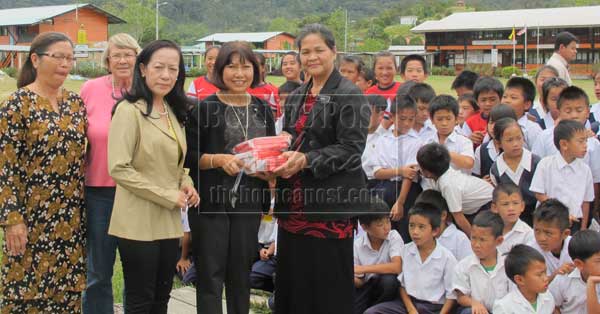 CARING GESTURE: The Inner Wheel members handing over presents for the students of Bario Primary School to headmistress Dora.

The morning assembly gave the ladies the opportunity to speak from their hearts to the children.

Pearl told her own story of how she aimed high and how she has been able to give back to her beloved homeland.

Why was she giving pencils, for instance? When she was in primary school, she had to be creative in using pencils down to the last centimetre by using the stalk of ‘resam’ to extend her pencil. She had blisters in her little finger because she was writing with short pencils. Nowadays, she values pencils more than ever.

The disciplined primary school children, all sitting cross legged on the floor of the wooden Astaka (open assembly hall), were awestruck by her gracious presence and her short but effective speech.

Rokiah advised the students to study hard so that they could become pilots and doctors. She advised them to stay healthy and be active. 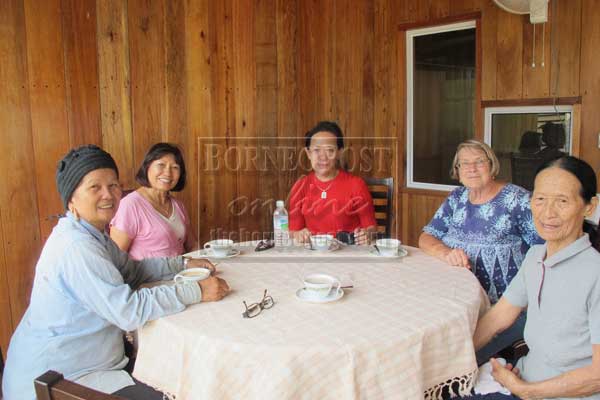 Florence, who spoke in English, advised them to learn English and go far, saying anyone could do this if they worked and studied hard and believed in themselves.

According to Dora, the children were very good in both Bahasa Malaysia and English because they and their parents were very enthusiastic about learning English. Tourists who come to Bario also help to open the minds of the people to the outside world.

“Many of the Penan students are still not wearing shoes,” remarked the observant Pearl.

She was already thinking of how to send school shoes to them.

The Penan students, in particular at the primary school level, are boarders. School mothers or student hostel administrators look after them and give them a good boarding programme of food and accommodation.

Food is prepared by a local Kelabit cook in the employ of the Sarawak government who has worked here for six years. By 11 o’clock, he has already prepared a balanced meal of curry chicken and a local vegetable with fragrant rice. Rice is fresh from the farm whenever parents bring extra rice to share.

The ladies also visited the pre-school department and met the lovely little Penan and Kelabit children – almost all of them undersized and dressed in a variety of clothing.

The favourite garb was long pants with an overly long dress and a sweat shirt on top. Pink is definitely the ‘in’ colour for the girls and blue of various shades for the boys. The pre-school teachers see to their snacks and the cleanliness of the classroom. There are 28 of them. Many of these Penan kids have walked one hour with their mothers to the school and they do that for more than 200 days a year!

In a separate project, the Miri Inner Wheel Club, headed by Florence, made a special charity drive and collected items to be donated to the Penans in the village of Arul Dalan. Home essentials like kettles and cooking pots are very much needed by the Penans who live in Arul Dalan, a newly set up Penan settlement about one hour’s walking distance from Bario Asal. Other donations include baby clothes and even a parang. A great essential is canvas which the Penan villagers appreciate.

The Penan children need more clothes and perhaps even special tuition to help them master their lessons in the primary school.

It is no wonder these Penan women are pencil-slim. They walk four hours a day just to make sure their children are safe in school and are back home in time to be with the family. Many modern city women don’t do so much on their treadmills!

Pearl and her friends are definitely thinking of more ways in which the Inner wheelers can help. They might see another project coming to Bario in November.