Thursday, February 2
You are at:Home»Features»Officer Aba
For the freshest news, join The Borneo Post's Telegram Channel and The Borneo Post on Newswav. 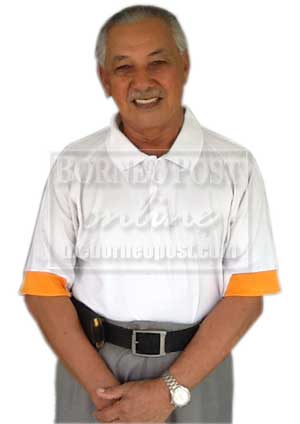 His father, Robiyel Huk, a tailor, came from Calcutta, and his mother was Lee Geok Cheng, a Chinese of Hakka descent, who converted to Islam during the Japanese Occupation to escape the Bamboo House where Chinese girls and women were forced to be pleasure ladies of the Japanese.

For some reasons best known to themselves, the Japanese did not take Muslim ladies. Lee took the name Rabiah bt Ghani and later married Robiyel Huk.

Aba Robiyel Huk went to St Joseph’s School. As the school was for Catholics only, he had to be seconded by a Catholic student to gain entry and he became one of a handful of Bumiputra students there. He grew up as a Kuching boy, mingling with Kuching kids, speaking Malay, Hokkien and Hakka.

He was 16 and was roaming about in town when the sight of inspector Hamdan Sirat (now Tan Sri) at the court house made a deep impression on him.

Later, he saw the late Mathew Chan, then probationary inspector, who looked stunningly handsome and smart in his uniform. Aba was struck and said to himself: Oh my God. I better study hard and join the police.

After passing his Junior Cambridge, Aba promptly joined the Sarawak Constabulary as probationary inspector. It was Jan, 19, 1956. He was 18. He never looked back.

After two months’ training as a recruit at the Sarawak Constabulary Police Depot, Kuching, Aba completed six months’ probationary inspector training in Kuala Lumpur. Thereafter, he was attached to the Central Police Station, Kuching, where he learned never to say I don’t know.

The divisional superintendent RTM Henry had asked Aba to draft a detailed incident report. When he said he couldn’t, he was ticked off: “You should never say you don’t know how to do it. You should always give it a try and then come and see me.”

An important lesson, Aba said, which prepared him to face up to any challenges in the future.

Shortly after that, Aba was sent to Nonok (Asajaya) as OCD (officer-in-charge of a police district) on a monthly salary of $60, out of which $20 went to his family. 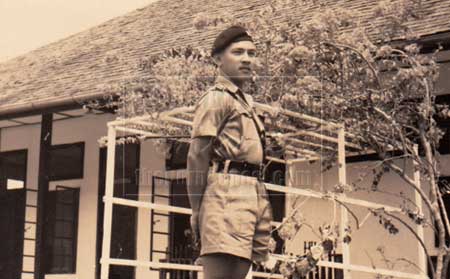 The Nonok people, mostly Chinese of Hakka descent, found they could connect with Aba who spoke fluent Hakka and treated him as their link with government agencies.

Aba said: “Even if you are a non-Chinese but once you speak their language, they have confidence in you and accept you and are more at home with you.”

A year later (1959), inspector Aba was posted to the Police Field Force, a paramilitary force which had a dual role of peace time police force and war time army.

He received counter insurgency training and was later sent to the Metropolitan Police College, Hendon, London, UK, for a police course. Upon his return in 1962, he was appointed OCD Serian.

On April 12, 1963, the police station at the Sarawak-Indonesian border town of Tebedu was attacked by Indonesian armed forces.

One policeman died, two were injured and all the arms and ammunition were taken by the Indonesians. It signalled the start of Indonesia’s confrontation against Malaysia.

Inspector Aba immediately sent PFF personnel to defend Tebedu and personally evacuated the injured policemen and their families to Serian.

As there was no road linking the two towns, they had to walk eight hours to Serian with the prospect of an ambush a real possibility. 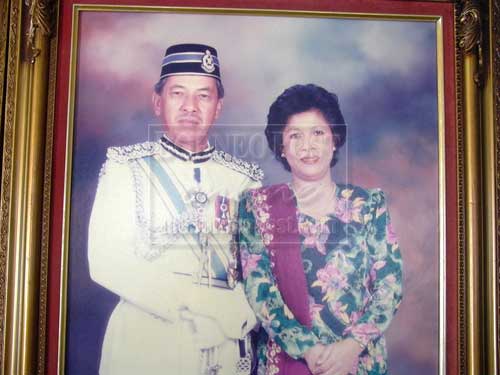 The British government then sent in their elite No. 42 Battalion British Marine Commandos to defend Serian.

Aba, who had been promoted to assistant superintendent of the Serian sub-division, made sure the British commandos were well integrated with the locals by giving them special cultural and language courses while ma-king the locals learn the English language.

In the end, they “became an integrated and effective guerilla force, going after the Indonesians and the communists.”

The next 15 years (1963-1978) saw Aba playing leading roles in operations against communist insurgents in various parts of Sarawak.

In 1963, at 25, Aba became head of the Police Force in the Lower Rajang Basin, comprising Sarikei, Binatang (now Bintangor) and Matu Daro, where he launched seek-and-destroy missions, imposed curfews to seal off the supply routes of the communists, set up listening posts in coastal villages and enforced sea and river patrol to prevent possible encroachments from the sea. 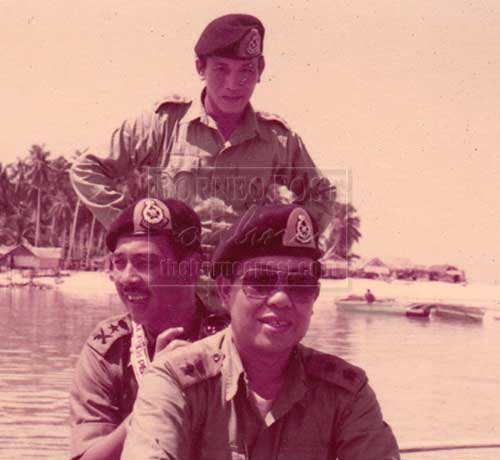 OPS TAYANG: Aba (middle), commander, East Malaysia Brigade Police Field Force, on his round off the coast of Sabah, during Ops Tayang in the late 1970’s.

In one of these operations, he intercepted and captured two boat loads of arms and ammunition bound for the Second Bureau of the Communist Insurgents in Tulai, Bintangor, and arrested the leader Suhaili bin Bojeng and his followers.

Suhaili carried a letter appointing him as governor militer of Kalimantan Timor. The letter was presented at the UN as proof of Indonesia’s aggression and Suhaili and his men were executed.

A year later, Aba became deputy superintendent of police for the Sibu Division. He was made border scouts staff officer four years later, responsible for assigning the border scouts to strategic villages as the eyes and ears of the counter-insurgency operations.

This was followed by appointment as commander of the 12th Battalion of the Police Field Force with the specific responsibility of routing the communist insurgents in the First and Second Divisions.

Working alongside two Malay Regiments and a corporate army battalion, Aba led the Police Field Force in Ops Jala Raja to wipe out the communists in the Nonok Peninsula, and later in Ops Hentam in Muara Tebas and various similar operations.

From 1973 to 1977, Aba became divisional superintendent, Kuching after which he took up the position of principal officer of RASCOM, Rajang Security Command, which had the civil service, army and police working together to counter communist insurgency activities.

In February 1986, Aba Robiyel Huk assumed the role of chief police officer, Penang, the first Sarawakian to head the police force in a semenanjung state.

It was a huge challenge as that state had one of the highest crime rates in the country, averaging one armed robbery a day.

Aba knew he needed the people’s support and cooperation by winning their confidence. So from day one, he adopted an open-door policy so people would feel free to come talk to him.

He said: “I believe in an open-door policy — no appointment is needed to see me because I believe the public will not come in to waste my time.”

He patronised hawkers’ stalls and coffeeshops to build rapport with the people. His fluency in the Hokkien dialect, the lingua franca of Penangites, really helped him build confidence and trust and win their cooperation.

The late Tun Lim Chong Yu, then Chief Minister of Penang, who wanted his senior officers “to be with the public” would cite Aba as a good example and implored other senior officers to emulate him.

Aba also believed “if you want to prevent crime, you must be seen in the streets at all times — 24 hours a day.”

He raised the visibility of the police by stepping up beat duties all over Penang and making sure their presence was seen and felt. He had his men march to their beat and back to their base at the end of their shift. He walked the talk by personally doing the beat himself — something he had learned from a former British commissioner of police, Sarawak, who would personally do the beat on a bicycle. The crime rate in Penang went consistently down in the six years of Aba’s tenure as chief police officer.

He received the Darjah Setia Pangkuan Negri or DSPN from the Penang state government which carries the title Dato’ in recognition of his contributions.

Dato’ Aba Robiyel Huk’s last posting was as chief police officer of the state of Perak. He retired in 1991.

He has just celebrated the golden jubilee of his marriage with his wife of 50 years, Datin Hajjah Halimah who had loyally supported her husband through his 37 years of dedicated service.

As chairman of PERKEP (Police Family’s Association), she also assumed the role of mother and sister to the wives of the police personnel, especially during times when the men had to go on dangerous missions.

Dato’ Aba Huk’s contributions go beyond success in counter-insurgency actions and fighting crime. And it is not just his common touch that makes him an exemplary officer. The greatest difference is he is an officer with a heart.

Deputy Inspector General of Police Tan Sri Jamil Johari (Rtd) said: “He (Aba) was the men’s general because he took care of their safety and also took care of their families. His officers were his friends. He was well-loved by them.”

Officer Aba was conscientious about the people’s safety when he carried out operations with his men.

During Ops Jala Raja in Nonok, for example, he made his men understand that toilets in the villages were built outside the houses and they should allow the people to use them even when there was a curfew.

He also told the villagers to carry a light, make noise to attract attention and go in a group if they needed to visit the toilet at night. This had prevented indiscriminate killing of innocent people.

Superintendent Nathan Ha Thiam Soon (Rtd) recalled that as a new recruit, he was doing the fatigue (manual tasks new recruits did) when a young inspector passed by and said: “You must be Nathan Ha. You must pass all your exams while you are in training school. Once you are on the ground, you have no chance.”

Nathan noted: “I was very touched because the young officer had never met me before, yet he knew my name and cared enough to encourage and advise a new recruit like me. That officer was Aba Huk. I went on to pass all my exams.”

In 1973, Nathan Ha was divisional assistant superintendent of police, heading the crime division in Kuching.

Aba was the divisional superintendent. His first words to Nathan when he reported for duty were: “Nathan, you can do anything you like as long as it is within the law. You can stretch the law but no nonsense …. it must be within the law.”

Nathan said those were the most encouraging and empowering words he had heard. With these words, he felt he had the freedom to act.

Nathan went on to become head of Narcotics Department in the police in Penang, Johor and Kuching.

Superintendent Leong Thiam Cheng (Rtd) who served in the Police Field Force in combat missions under the command of Aba, said simply:

“He (Aba) is a good officer and a gentleman.”