Thursday, June 4
You are at:Home»News»Sarawak»Unhappy member lodges complaint against association 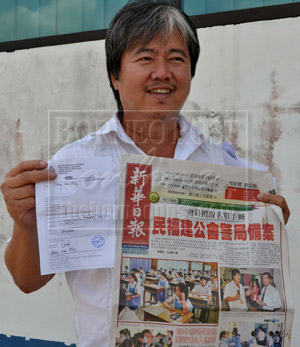 UNHAPPY: Chieng shows a copy of the police report he made and a newspaper cutting on the association lodging a police report on his alleged misconduct.

He said he took the list to find out whether his and other friends’ names were on the list to attend the association’s triennial general meeting (TGM) on Oct 28.

“I have asked for permission to see and check my friends’ and my status, whether we are listed to attend or not but my request was ignored.

“I have been informed that the list of members’ names has not been updated,” he told reporters.

As he was not satisfied with the answer given to his request and with the TGM around the corner, he decided to take the list of names and information on the TGM without the knowledge and permission of the association.

Upon reading the list, he discovered that it contained the names of members who had died and the notice of TGM seemed confusing.

He said he was informed that the letter might be on the association’s legality.

“If the allegation is true, it will create problems and we have to wait six months to re-establish the association, and will certainly pose difficulties to members and Chinese society,” he added.