Friday, December 3
You are at:Home»News»Sarawak»Facebook comes to the rescue of missing woman 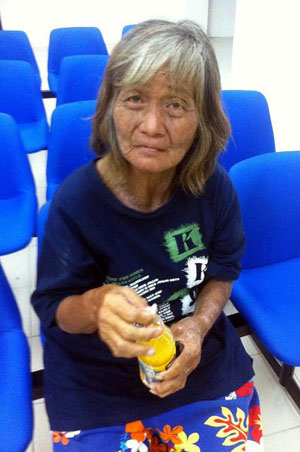 IN SAFE HANDS: Ting at Sungei Merah police station. She has since returned to her family.

SIBU: Facebook helped return a woman with dementia to her family after she went missing from her home at Lai Chee Lane here on Friday.

The 66-year-old, identified by the police as Ting Hong Leng, was spotted squatting at a shop house staircase 24 hours later (Saturday evening) by Pelawan assemblyman David Wong when he was informed by a concerned shop owner there.

Wong called in the police to place the woman at Sungei Merah police station while the assemblyman posted the photograph of Ting on his Facebook at 10.55pm.

Her niece saw the post of the missing Ting on Facebook, and by 11am on Sunday, Ting was taken home.

Wong told reporters yesterday, “The social network site is a very effective tool; it helps me to connect not only to the people in Sibu, but, to others throughout the world.”

The assemblyman said he posted the picture of Ting twice on his Facebook; the second posting was recorded at 11.22pm on Saturday.

In the first Facebook post on Saturday, Wong appealed for public help, saying a woman in her 60s was found wandering in Sungei Merah.

He posted Ting’s photograph taken on a handphone and said the woman did not have her identity card with her. He said Ting was in the safe hands of Sungei Merah policemen.

In his second post at 11.22pm, Wong updated that the woman, looking hungry, had been given food.

He again gave his contact number. Wong yesterday thanked the policemen and the shop owner for their help.

“We need Good Samaritans like them to build a caring community.”

Relating the incident, he said it was on Saturday at nightfall when he received the call from the shop owner about Ting.

“I was also in Sungei Merah then. I rushed over and found Ting looking tired.  She could not respond to my questions. She did not know her name, nor remember where she came from. She insisted her home was at a staircase.”

He said when the policemen arrived shortly, he (Wong) followed them to Sungei Merah police station, and when Ting had settled there, he left.

“A DAP party member who was with me then went back to the police station to bring food for Ting.”

Before Ting was found, her son Hii Yik Ing also lodged a police report on his mother’s missing.

The 16-year-old said his mother left home on Friday afternoon wearing a blue T-shirt and a pair of blue shorts.

Wong said yesterday Ting’s sister had left a message in his Facebook, saying they had taken Ting home

The posts on Ting’s missing in Wong’s Facebook have stirred concern among the people.

Wong said, “All is well that ends well.”